The Huanan seafood wholesale market in central Wuhan was the kind of place where people often caught colds. Vendors started setting up as early as 3am, plunging their hands into buckets of cold water as they cleaned and prepared produce for the customers that arrived every morning.

The sprawling market of more than 20 streets spanned two sides of a main road in an upscale neighbourhood of the commercial district of Hankou. Racks of meat were hung on hooks or spilled out on plastic mats. Workers walked around in welly boots. Drains lined the kerb alongside stores selling everything from live poultry to seafood and cooking ingredients. It was crowded but clean.

So, in mid-December when Lan, who sold dried seafood at one of more than 1,000 stalls in Huanan, felt unwell, he thought little of it.

He stayed home to rest but after losing 3kg in just a few days, he decided to go to his regular hospital for a check up.

From there he was sent to a hospital that specialises in infectious diseases and was admitted on 19 December. He remembers how the staff praised his positive attitude. “I was just a little bit sick. I wasn’t scared in the slightest,” said Lan, who asked not to disclose his full name.

Lan could not have known then that he was among the first cases of a new, highly contagious coronavirus that would kill more than 2,500 people in his city and engulf the world, infecting more than 1.6 million people so far and killing more than 95,000. The World Health Organization has described the outbreak of Covid-19 as the worst global crisis since the second world war. “I thought I had a cold. I had no idea,” he said.

Coronavirus infections began cropping up in Wuhan in December – and reportedly as early as November – but the Chinese authorities did not inform the public that the virus could pass between humans until late January. 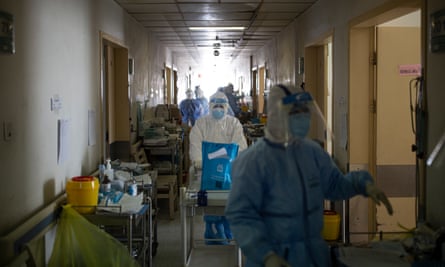 A makeshift Intensive care unit in February at the Red Cross hospital in Wuhan where many patients were in critical condition. Photograph: Gerry Yin/The Guardian

Now, as China celebrates what it claims is victory over the disease, the number of infections and deaths is increasing around the world. Officials from Australia, the US and the UK have accused Beijing of suppressing information, allowing a localised outbreak to turn into a pandemic.

Beijing claims its strict lockdowns bought the world time that health authorities in some countries chose to squander. But interviews with early patients, medical workers and residents, as well as leaked internal documents, accounts from whistleblowers and research studies, show delays in the first few weeks of the epidemic, government missteps that would have far-reaching consequences.

By the end of December, before Lan recovered after more than 20 days in hospital, word had gotten out in Wuhan about a mystery illness. Internet users circulated screenshots of a WeChat conversation on 30 December in which a doctor at Wuhan Red Cross hospital, Liu Wen, warned colleagues of confirmed cases of a contagious coronavirus at another hospital. “Wash your hands! Face masks! Gloves!” the medic wrote.

That same day an ophthalmologist at Wuhan central hospital named Li Wenliang told a WeChat group of former medical school classmates that seven people at his hospital had contracted what he believed to be Sars, the outbreak that killed more than 600 people in mainland China and Hong Kong in 2002-03. 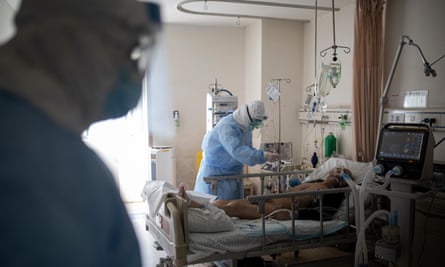 An “urgent notice” from the Wuhan health commission warning of “successive cases of unknown pneumonia” was also leaked and posted online on 30 December. The statement ordered hospitals to “strengthen responsible leadership” and ensure that no one “disclose information to the public without authorisation.”

Under growing pressure, the following day the health commission said researchers were investigating 27 cases of viral pneumonia, its first official notice about the virus. There was no “obvious evidence of human-to-human transmission,” the statement said, describing the outbreak as linked to the seafood market and assuring the public that all patients had been quarantined and their contacts placed under observation. “The disease is preventable and controllable,” it added.

A day later, on 1 January, the Huanan seafood market was closed and Wuhan’s public security bureau announced that eight people had been “punished” for spreading rumours. Authorities also tasked hospitals to screen for pneumonia cases linked to the market. It wasn’t until 20 January that vendors in the market were asked to submit to temperature checks and blood tests.

But across the Yangtze River, some 6 miles (10km) away, people who had never been to the market were falling sick. In the second week of January, Coco Han, 22, developed a cough she couldn’t shake. 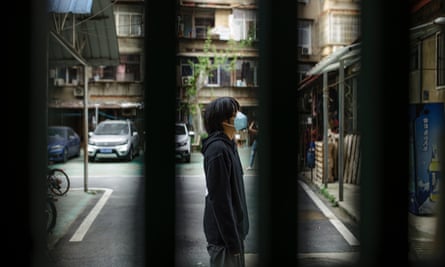 After a week, she went to see her local clinic on 20 January and had a CT scan done. The results showed an infection on her lungs. A medic in a full hazmat suit escorted her to another hospital for more tests.

Han’s mother joined her in a crowded waiting room where those waiting began to panic. Han had a mask but her mother had not thought to wear one, given the government’s assurance. A young woman in line in front of them fainted and Han’s mother hugged her, telling Han not to look.

“We all knew we might have the virus. Everyone was scared,” Han said. “I think the doctors knew it was transmissible between humans or they wouldn’t have sat so far from us and kept the windows open.”

While Han was told that she probably had “that pneumonia”, she was not able to confirm the diagnosis because the hospital was not authorised to do so, an issue many early patients faced. She was told to go home and self-quarantine but the doctors prescribed her medicine that she had to renew every three days at the hospital, waiting in line with others.

“I was extremely worried I was passing it to others, but I couldn’t let my parents go somewhere so dangerous,” she said.

Daron Hu, 35, who also had never been to the Huanan seafood market, began to feel feverish and dizzy on 16 January. He thought he was just hungover after a few drinks the previous night. Three days later, still unwell, he took a train to Jiangsu province for a work trip. He travelled back to Wuhan and from there returned to his hometown a few hours to the south.

By the time Hu was admitted into his local hospital, a team of researchers sent by the central government had arrived in Wuhan. Zhong Nanshan, a top respiratory expert famous for countering the government narrative on Sars, said on the evening of 20 January that there had already been cases of human-to-human transmission.

Hu, who at his worst point suffered diarrhoea and breathing troubles in addition to a fever and a cough, told his family that he was fine. But over the next 24 days in the hospital, at least three other patients died. He considered writing a will. “I saw some people give up. It is very lonely,” Hu said.

‘Things felt out of control’

By the time officials revealed the infectiousness of the virus, hospitals in Wuhan were already overwhelmed and the numbers increased after the announcement. Video taken on 22 and 23 January showed crowds of patients at Wuhan No 6 hospital in Wuchang, another district of Wuhan.

“It was so busy. We couldn’t go home,” said a nurse who slept in the hospital dormitory and rotated every four hours in a team of six people to keep up. 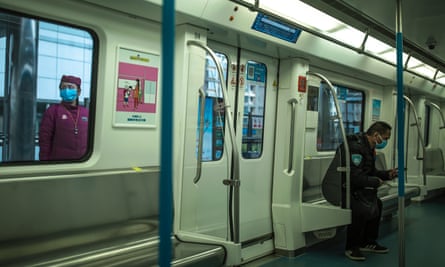 On 28 March 28 the subway in Wuhan resumed operation after two months of being closed. Photograph: Gerry Yin/The Guardian

Another medic gestured to the sidewalk outside the hospital. “This was all full,” he said. “Every day people were dying.”

On 23 January, the city of 11 million people was placed under lockdown. Surrounding areas followed suit, putting a total of more than 50 million people under de-facto home quarantine.

Facing severe shortages of supplies, staff and space, the next few weeks were desperate. Hospitals turned away patients, sending them home where they often infected their families. Footage showed medics weeping and people collapsed in the streets. Dead bodies were left in hospitals where staff were too busy to collect them. Internet forums filled with pages of pleas for help by residents trying to save loved ones. By 19 February, the death toll from the virus had passed 2,000.

“The virus was very quick. At the beginning, things felt out of control. We didn’t know what would happen,” said one doctor treating coronavirus patients at Wuhan central hospital, who asked not to be named because he was not given permission to speak to media.

It is a time authorities are quick to gloss over as they celebrate the lifting of Wuhan’s almost three-month lockdown, an event marked with light shows and banners hailing the success of the “people’s war”.

“Beijing has been working very hard to fight the negative domestic and international fallout,” said Ho-Fung Hung, a professor in political economy at Johns Hopkins University.

“But this is far from adequate in stopping people from discussing China’s responsibility in covering up the outbreak in the beginning,” he said. 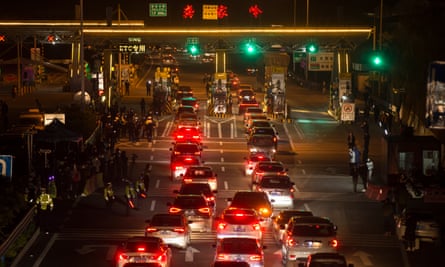 On 8 April the Wuhan Gongjialing toll station reopens as authorities lift traffic restrictions after 76 days of lockdown in which residents were not allowed to leave the city. Photograph: Gerry Yin/The Guardian

Wuhan is slowly coming back to life. Neighbourhoods have erected flags and signs declaring them “virus free”. Cars are starting to fill the streets again as people return to work. Yet, visible reminders of the epidemic remain. Rows of tall metal fencing surround the still-shuttered Huanan seafood market, its former entrances manned by security while police cars patrol nearby.

And not everyone is willing to forget. On a wall near her home, Han recently spray-painted the Chinese characters bu neng, bu mingbai (I cannot, I do not understand), a reference to a declaration Li Wenliang, the whistleblower doctor, was forced to sign before eventually succumbing to the virus he tried to warn others about. Underneath the words, some residents have burned piles of paper money, a way to honour the dead, drawing small white circles around the ashes.

“They said stay. I stayed. They said everything was fine. I believed. I believed it all,” Han says. “I want to know why this happened. Who said not to tell people?”

“I will remember this for the rest of my life – I understand now that we are not important.”