Italy‘s coronavirus situation is ‘largely out of control’, a leading health expert has warned as doctors called for a new national lockdown to counter a rising second wave of coronavirus cases.

‘I am afraid there is no doubt that the situation is largely out of control,’ Massimo Galli, the head of the infectious diseases department at Milan’s renowned Sacco hospital, told RAI television on Monday.

‘Other illnesses don’t go on strike because Covid exists and we have to get organised… otherwise the pandemic will end up doing damage that goes beyond the already very sad number of deaths,’ he added.

At the same time, 331 new deaths from the virus were reported in the country where almost 41,400 people have died since the pandemic reached Italy in February. 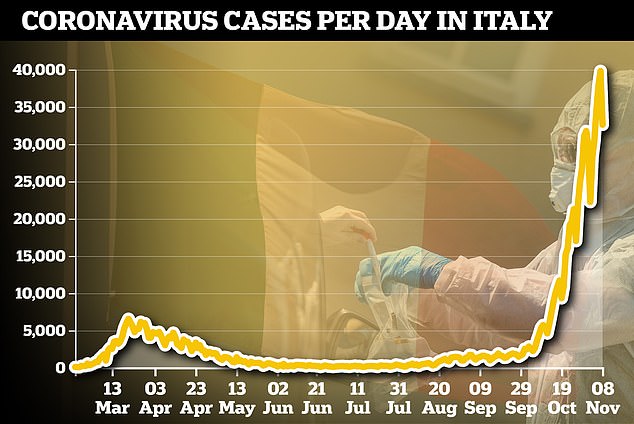 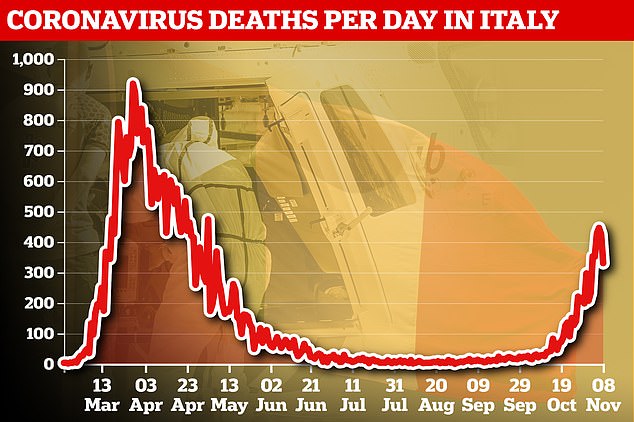 On Sunday 331 new deaths from the virus were reported in Italy where almost 41,400 people have died since the pandemic reached the country in February 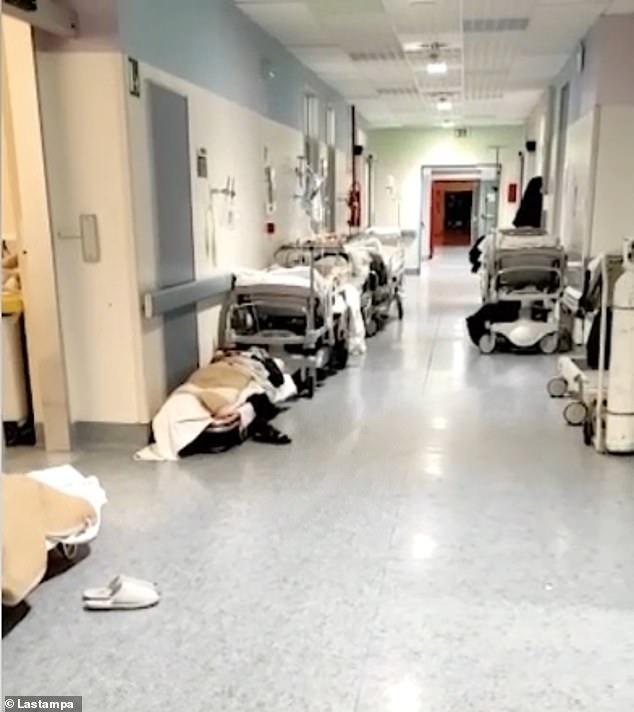 In some hospitals, patients are being given oxygen lying on stretchers in corridors as the country runs out of beds

In some hospitals, patients are being given oxygen lying on stretchers in corridors as the country runs out of beds.

Infectious diseases expert Galli backed a call by the national federation of medical associations for a ‘total lockdown throughout the country’.

In a bid to tackle the rising number of cases, Prime Minister Giuseppe Conte’s government last week imposed a countrywide curfew from 10pm-5am during which time people can only leave home for work or medical reasons.

Throughout the country mask wearing is compulsory both indoors and outside.

The new restrictions divide the country into three zones (red, orange and green) according to the severity of the outbreak in local areas.

In red zones, all non-essential businesses have closed, while in orange zones restaurants and bars have closed but some services including hair salons have remained open.

Green zones, meanwhile, have no additional restrictions above national measures. 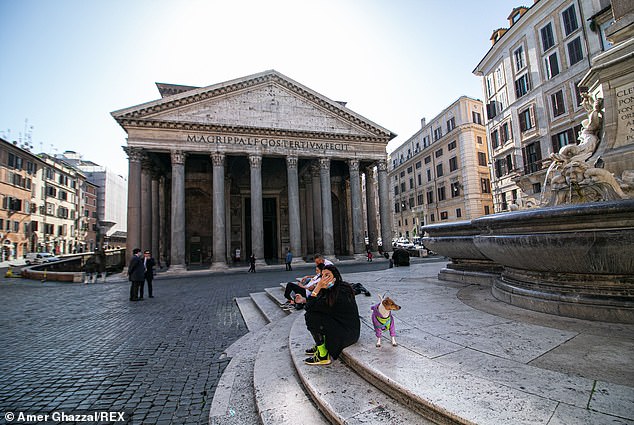 New restrictions introduced on Friday divide the country into three zones (red, orange and green) according to the severity of the outbreak in local areas. Pictured: A few pedestrians are seen outside the usually busy square surrounding the Pantheon in Rome 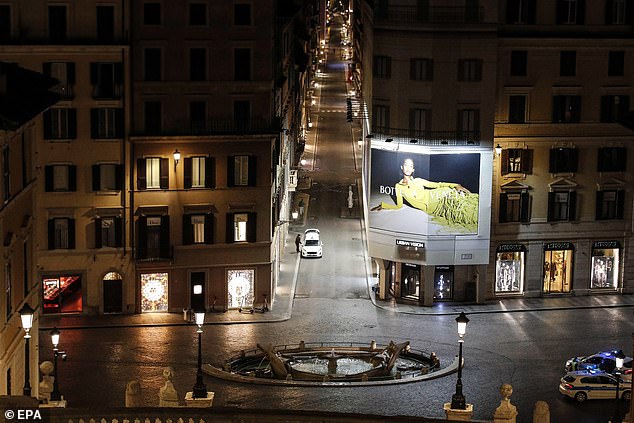 Via Condotti in Rome is deserted during a 10pm to 5am curfew. During that time people can only leave their homes for work, medical reasons or emergencies 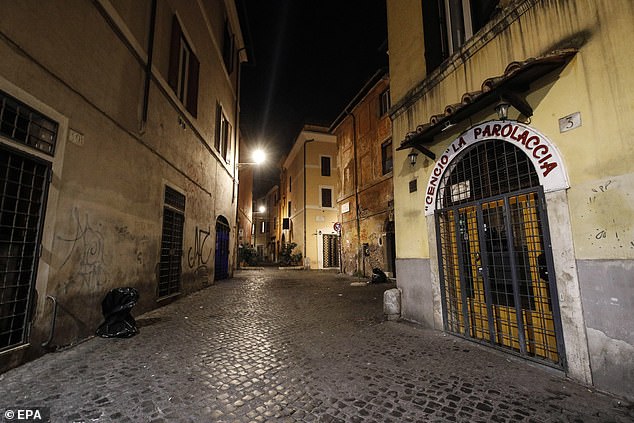 An eerily quiet street is pictured in the Italian capital, Rome, during a nighttime curfew introduced on Friday as part of new measures to curb the spread of coronavirus

Public transport capacity has been slashed in a bid to stop people mixing outside of their homes and cinemas, gyms and museums have also closed.

The current rules are considerably less harsh than the blanket measures imposed during the first lockdown in March.

The lockdown was successful in curbing the spread of the virus but was punishing for the country’s economy.

Italy approved a new aid package to cushion the blow to the economy from the new restrictions on Friday night.

The measures agreed by cabinet are worth 2.9 billion euros ($3.4 billion), a person with knowledge of the matter said.

The package delays to the spring tax payments due in November and increases transfers to businesses operating in regions classed as red or orange.

‘We have increased compensations because we realised that what was granted for the spring lockdown wasn’t enough,’ Conte told Corriere della Sera daily in an interview. ‘We’ve also widened the number of beneficiaries.’ 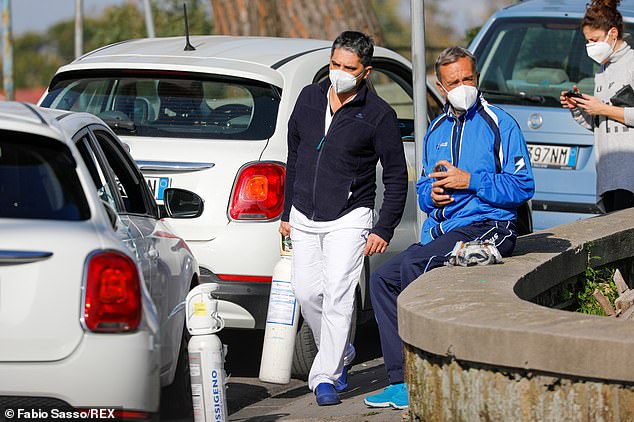 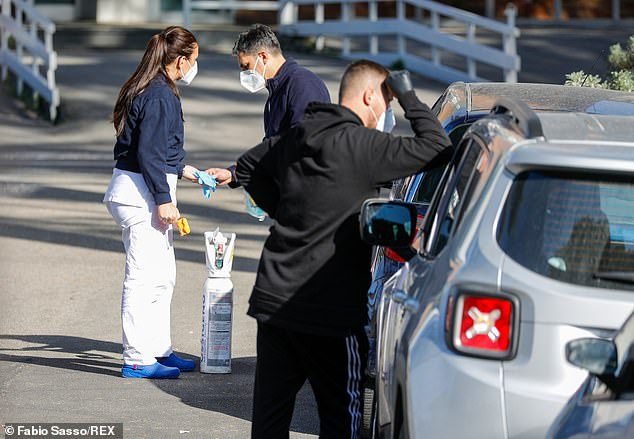 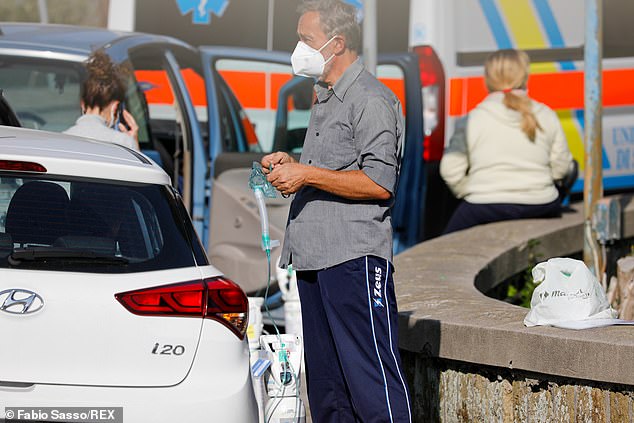 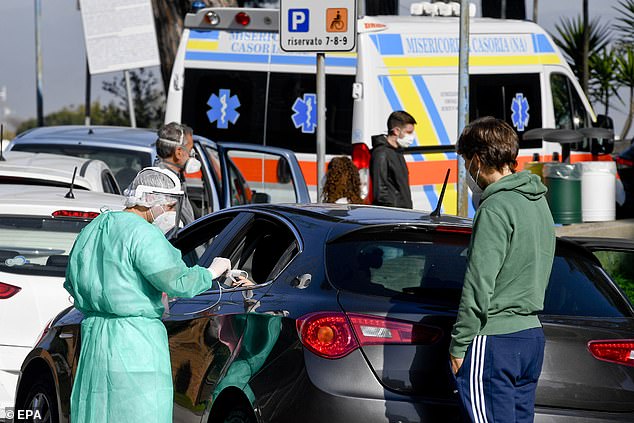 Pictured: cars form a queue at a drive-in testing facility in the southern city of Naples on Monday 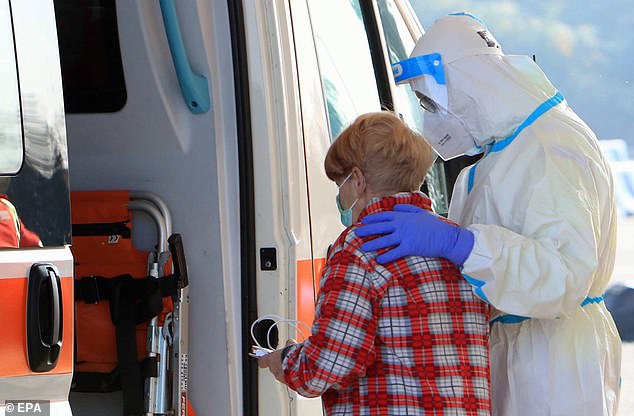 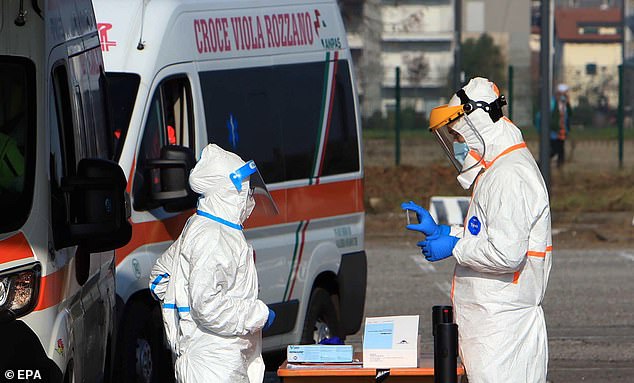 The package provides funds for childcare or work leave for parents who are not able to work from home, after the government moved classes online for high schools and the last two years of middle school.

Conte said funds had also been set aside for regions that could turn into high-risk zones under the current system, which has been attacked by some politicians in the worst-hit areas.

‘There’s no turning back. The alternative is to shut down the entire country causing enormous damage. It would not be a case of ‘a sorrow shared is a sorrow halved’, just disaster for everyone,’ Conte said.

The government is desperate to avoid the crippling impact of another full lockdown but a surge in cases and a growing number of hospitalisations are straining health services and prompting calls for tougher action.

Not everyone is keen on the idea of another lockdown, however. On Friday, a large crowd gathered in Rome to protest the new restrictions in defiance of the curfew.

Taxi drivers have also voiced their displeasure with the measures, which have dramatically reduced their income. 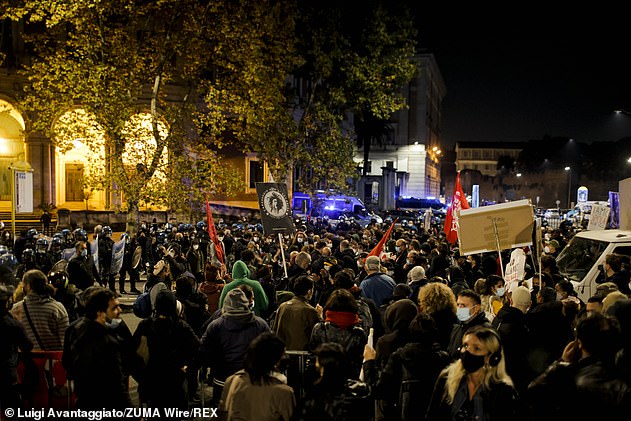 Pictured: Protesters gather in Porta Pia in Rome on Friday in defiance of a nighttime curfew 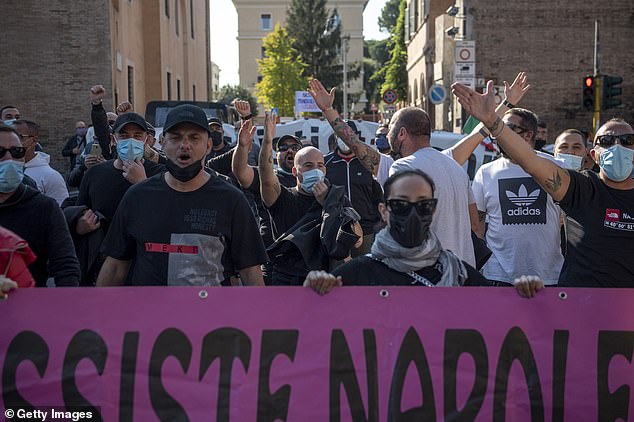