Angela Symonds has had a “nightmare few weeks”. Her teenage son contracted Covid-19 at the end of September before she tested positive for the virus herself a couple of weeks later.

She and her family had to self-isolate for 21 days. At first Symonds was working long hours from home while also caring for her son, who rang her from his room one night at 1am complaining that he couldn’t breathe. Then she got the virus and had severe panic attacks and acute anxiety.

“I’ve never had anything like this in my life before,” she says. “I got very breathless and had a panic attack. I was so anxious I couldn’t sit down. I was walking around the house thinking: ‘What is wrong with me?’ I woke up in the middle of the night, went downstairs, and had to shout for my husband because I couldn’t get up off the floor.”

Symonds rang her GP and was signed off work and referred for cognitive behavioural therapy but the earliest it could start was at the end of November. She couldn’t wait that long and so when she saw a leaflet advertising Open Door, a local mental health drop-in for people in crisis in the centre of Stockport, in Greater Manchester, she decided to give it a go.

She rang up and was told she could visit and see someone face to face. “I had never done anything like this,” she recounts. “I walked down from my house. I hadn’t had any breakfast and couldn’t eat. I looked horrendous. I went in and was hysterical. Everything came out.”

Open Door opened last month. The NHS-funded service, run by the charity Making Space, was due to launch in April at the height of lockdown but the team operated a telephone helpline instead, which is still running 24/7. Now, because it is designated a key service, the building is open seven days a week from 10am to 8pm during the second lockdown with all the necessary safety measures in place. People can drop in for an appointment or help without calling ahead. Its high street location was chosen for its convenience and to help challenge the stigma around mental health, and the atmosphere is deliberately non-clinical; one floor is open plan with sofas, a computer, books and the radio on in the background. Downstairs are rooms for appointments and a kitchen with free tea and coffee.

It employs a manager, two team leaders and four recovery workers. It is also recruiting a team of volunteer peer support workers, who have experience of mental health issues and using services in the town. 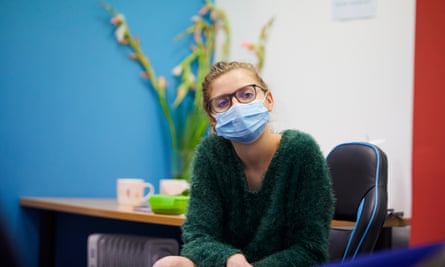 When Symonds turned up, she was greeted at the door and was able to talk to someone about what she had gone through. She has been back three times and says she is feeling much better, although she still has some anxiety. She has learned coping techniques such as meditation. “I’ve never asked for help before,” says Symonds. “I’m a positive person and felt guilty for feeling like this. I’ve got a nice house and a good family and a job where I help others. It frightens me to death. I’ve never felt fear like it in my life. I thought I was going mad. It came out of the blue.”

She is not alone. Coronavirus and lockdown have taken an immeasurable toll on people’s mental health. A survey conducted by the Royal College of Psychiatrists in May reported that 43% of UK psychiatrists had an increase in urgent and emergency cases following lockdown.

According to data from the Office for National Statistics, almost one in five adults (19.2%) in Great Britain were likely to be experiencing some form of depression in June – nearly double the rate before the pandemic. A major study into the mental health impact of the pandemic found women, young people and those in high-risk categories for Covid-19 were most affected, though different factors, including fear of catching the virus, work insecurity, loneliness, domestic abuse and more, drove the mental health difficulties in each group.

The population of Stockport has been living under restrictions for months. Residents there and further afield in the Greater Manchester area feel browbeaten and exhausted by the virus, alongside a sense of injustice that it never really left.

Amy Evans, Open Door’s service manager, says: “People come in with anxiety about jobs, families, what it’s going to be like over winter. The whole world has changed around them.”

Since it opened a few weeks ago, 39 people have walked through its doors. The team is seeing people from all age groups and has seen an increase in men reaching out for support. The primary reason for accessing the service is to manage mental health, specifically anxiety as a new condition or in addition to other longstanding issues.

“None of us can say we will never need a service like this,” says Evans. “There are huge amounts of anxiety around. We’re seeing people concerned for their children. Lockdown has been isolating. Young men in their early 20s are coming in who don’t have a job. The older population tend to call up saying they don’t get to see grandchildren or with general enquiries.”

The service was originally commissioned to relieve pressure on A&E. Lynzi Shepherd, commissioning manager at Stockport clinical commissioning group, was aware that many people with mental health problems were attending the emergency department because there was nowhere else for them to go. “From the data at the time, there were on average between 10 and 15 mental health attendances a day. The emergency department should not be the place for someone with mental health problems,” she says.

Open Door is the culmination of three years of work and has links with other services in the town such as GP practices, the hospital, the police and the ambulance service. It also works closely with the British Red Cross to support people in crisis in the area. The average number of presentations per user is less than three, demonstrating how the service has been able to support people and refer them to appropriate long-term help.

On the day I visited, just before the second lockdown in England came into force, few people were on the streets in the tier 3 region and no one came in seeking help.

But Shepherd says: “The population has suffered with isolation. Now we’re at a point with the second lockdown that will coincide with winter pressures, which is a difficult time anyway.”

And Evans adds: “People are jumping up and down asking for support or communication of some kind. If people don’t have support where will that spiral to?”

• Some names have been changed.

Reporting on wealth: ‘The virus isn’t a leveller. It has made the rich richer’