For live music fans in most Australian states, a long winter deprived of gigs broke a few months ago, as artists began taking strange and tentative steps back onto the stage.

But it’s a new normal for these concerts, and yet another uncanny valley of the post-Covid world: a social experience where we can’t socialise; a show where dancing, hugging and head-banging are essentially illegal. Sweaty dance floors and beer queues are out, replaced by parlour-style seating and severely reduced capacities, often resulting in artists performing multiple shows a night. Dinner and a show has, against all odds, become the norm again.

It’s a welcome return for the industry and venues, but a strange experience for punters. Nothing burns more than being forced to sit politely when all you want to do is jump around and cheer with each other – especially after going so long without.

And for those on stage, it’s another thing entirely. Last month, at the first of what would be seven sequential shows at Mary’s Underground in Sydney, hip-hop multi-hyphenate Genesis Owusu (real name Kofi Owusu-Ansah) took the stage fizzing with kinetic energy, and resplendent in a tailored red suit and face plaster, looking like a cross between Andre 3000 and Tutankhamun.

It was a bizarre scene: an intensely charismatic artist exploding into his music, playing to a mostly motionless audience that seemed uninterested – but were in fact stuck in their seats thanks to the venue’s vital Covid-safe rules.

I found the experience excruciating, wanting nothing more than to get up and dance along to Owusu-Ansah, a dynamic performer who maintained this pace for his entire Prince-esque set. When asked what it felt like from his perspective, he seems unfazed. 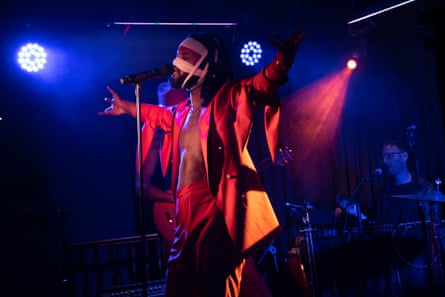 “When I started touring years ago, I was playing shows to no one, [just] the bar staff. I was performing the exact same way,” Owusu-Ansah says. “It’s never really been a product of the crowd and what they give back. But from the few faces I could see, I could see people really wanting to get up, shuffling around in their seats. That was enough to make me say, ‘Let’s do it for real.’”

In Brisbane, Ball Park Music has just finished a record run of 13 shows over a week at the Triffid, to celebrate the release of their fifth album. Playing “capacity” gigs that are less than a quarter full mean the band had to adjust not only their metrics, but also their formatting.

“I’ve always found Australian audiences to be rowdier and merrier than most,” says frontman Sam Cromack. “I’m used to that energy in the room. But even though we are a band that likes to feed off that, it’s refreshing to have the opportunity to do something else. We could get ideas across the line we couldn’t at our normal shows.”

Cromack says the Triffid residency is among “the best and most rewarding music experiences I’ve ever had. We’ve never been closer as a band or played better.” It helps that the group are Queenslanders, in a state that’s remained mostly Covid-free for months.

A lack of expectations – this format was new for everyone – also allowed his band to delve deeper into their catalogue, changing arrangements and focusing more on craft. “I’ve had lots of friends and family tell me sincerely that it was the best we’ve ever sounded.”

It’s not sustainable or feasible for us or venues

But it comes at a price. Almost all Covid-safe live performances are split into “early” and “late” sessions, primarily designed to make the economics of reduced capacity gigs work. With a brief stint in musical theatre, Cromack has some experience in playing two shows a night, but says it paled in comparison to this. “It was brutally exhausting on our minds and bodies. For Daniel our drummer, especially, but also all of us on vocals. We were playing between 30 to 35 songs a day, plus soundchecks on top of that, for a week.”

Owusu-Ansah agrees. “I mean, I wouldn’t do it again,” he says with a laugh. By the end of the run, “my voice was on its last legs and my suit was awful”.

Then there’s the money. You don’t have to be a commerce major to gaze around a mostly empty room and wonder how your favourite act is earning a crust. “I don’t like to bang on about the financial side of things, because it’s boring. But there’s no denying that this side of the conversation exists,” says Cromack. “It will always be my pleasure to perform, but I don’t want people to have misconceptions about what it’s like for artists. It’s not sustainable or feasible for us or venues.”

Owusu-Ansah’s all-star backing band – including Touch Sensitive, Jonti Danilewitz and Kirin J Callinan, playing together for the first time – certainly wasn’t the most cost-effective way to do it. “I’m pretty sure we lost money on every show,” he says. “But it really wasn’t about that this time.”

Cromack puts it more bluntly: “We did 13 shows in seven days to pull an audience equivalent of what we could comfortably sell out at Fortitude Music Hall in one night.” 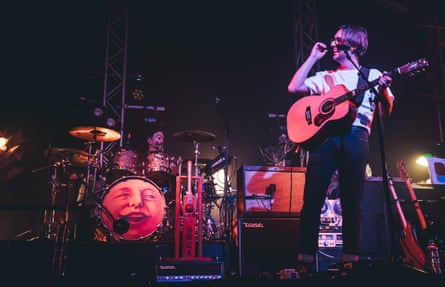 ‘The best we’ve ever sounded’: there are silver linings for Sam Cromack of Ball Park Music. Photograph: Dave Kan

In the context of Covid-19, live music is often referred to as “first in, last out”, signifying how quickly the scene shut down and how long it will take to fully recover. There have been exceptions to the rule – small festivals in Western Australia, occasional drive-in concerts, and the first indoor stadium gigs just announced for New South Wales – but these are mostly outliers. The federal government has seemed more concerned with getting people back to the races and the football than to the arts, signified by a slow trickle of funding that is mostly yet to be distributed.

The industry has consistently called for proper relief, with the Australian Live Music Business Council predicting 85% of venues in NSW and 70% nationwide may not survive the next six months – and almost 10,000 roadies, sound technicians and backstage staff have been left out in the cold, with many unable to access government benefits.

Seeing live music in this climate means acknowledging there’s still a long way to go. But just being there is a start, and there’s one silver lining: smaller shows with pre-arranged seating means clearer sight lines, crisper sound and limited distractions.

“We baulked at first when we were offered the shows; we thought it would be a weird vibe,” Cromack says. “But then we went to see our friend’s band [Sweater Curse]. Someone took us upstairs to our seats, we ordered a jug of beer from our phone and we had an uninterrupted view of the stage. Sure it wasn’t shoulder to shoulder or moshing, but we said to each other, ‘Hey, this isn’t shit. It’s actually kind of cool!’”

‘This is not a third Obama term’: Biden sits for his first post-election interview – as it happened