Hundreds of emails released under freedom of information law show Australia Post keeping One Nation up to date on their efforts to deliver more than 100 stubby holders to residents of public housing towers Pauline Hanson had just days earlier described as “alcoholics and drug addicts”, stating it was in the “public interest” they be delivered.

The emails also show the then chief executive, Christine Holgate, kept tabs on One Nation’s actions when the parcels were withheld by the City of Melbourne, and an Australia Post staff member attempted to call Hanson herself.

In September, Nine newspapers reported Australia Post had threatened to go to the Australian federal police unless the City of Melbourne delivered more than 100 One Nation-branded stubby holders to residents of north Melbourne public housing towers that were at the time in July under lockdown due to a Covid-19 outbreak.

One Nation had sent the stubby holders in the mail just days after Hanson had, on breakfast television, referred to the 3,000 residents of the towers as “alcoholics” and “drug addicts” and accused them of not following social distancing rules.

The Age report linked Australia Post’s intervention to lobbying by the government-owned company over a disallowance motion in the Senate to overturn changes to mail delivery in metropolitan areas to every second day rather than every day.

Hanson’s face is on the stubby holder, along with the slogan “I’ve got the guts to say what you’re thinking”. Each of the stubby holders sent out had a hand-written note stating “no hard feelings”. 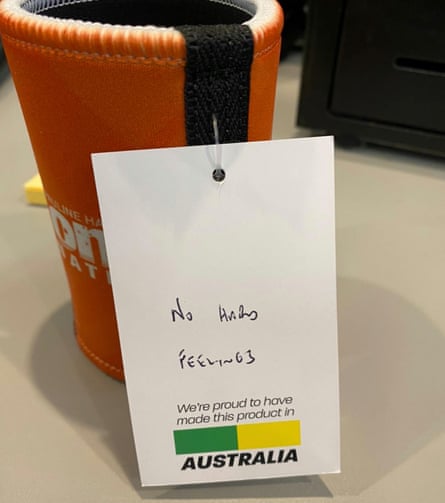 At the time, City of Melbourne and the Department of Health and Human Services in Victoria were controlling access to the towers. When hundreds of the parcels arrived, one was opened by a City of Melbourne staff member, and the remainder were withheld from delivery on the grounds it would worsen an already difficult situation with the residents of the towers.

Australia Post this month has published hundreds of emails, text messages and WhatsApp messages surrounding the saga in response to a freedom of information request from the transparency website Right to Know.

Australia Post has maintained that its intervention to ensure the delivery of the mail was the standard approach it would take for all mail delivery.

However, before City of Melbourne ever got involved, the emails reveal an account manager at Australia Post ensuring the packages would be delivered, and then keeping One Nation in the loop about the issues with the delivery in July.

“Alex from One Nation advised the articles were ‘time sensitive and in Public Interest need to be delivered to the residents as soon as they can’ and could they be given to the Police to be delivered,” the account manager said on 8 July.

A follow-up email the following day states the packages had been dropped at the command centre set up for the tower and “thank you all for your assistance with this delicate issue”.

“Well done all, thank you,” a government manager within Australia Post – whose name was redacted in the documents – replied.

The emails show Holgate was not alerted to the deliveries until City of Melbourne discovered what was in the packages and wrote to the Australian federal police on 10 July. A member of Australia Post’s media and communications team alerted Holgate that she would likely get a call from the City of Melbourne lord mayor, Sally Capp, about the matter.

“City of Melbourne/DHHS have decided to open one of the parcels (unbeknownst to us), to determine whether it is essential and needs to go up [to the residents].

“Turns out it is a stubby holder. Pic attached. DHHS/City of Melbourne – deciding that things are tense in the towers precinct already and with a culturally diverse population – decide to hold the items and not deliver them.” 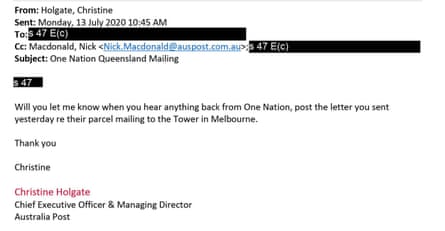 “Will you let me know when you hear anything back from One Nation, post the letter you sent yesterday re their parcel mailing to the Tower in Melbourne,” Holgate said on 13 July.

“They are concerned about media leaks and are eager to have the articles back in their possession as soon as can be reasonably achieved,” the email states.

A note from a staff member on 13 July also states a message was left for Hanson. 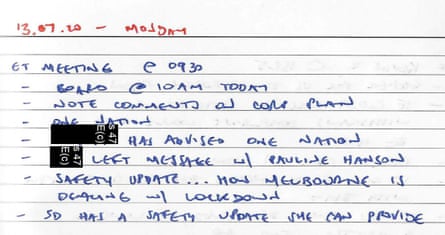 Australia Post did not say who called Hanson on the day when Guardian Australia sought comment but said “no one spoke to Ms Hanson at the time of the incident”.

Guardian Australia also sought comment from Holgate and One Nation.

In other email threads released, an Australia Post staff member said “feels like Pauline is trying to create a stir”, while another staffer questioned whether the packages came from Hanson herself, and whether they might have been a prank from someone else.

Eventually the lockdown of the towers ended, but One Nation had requested the items be shipped back. A total of 101 of the 104 packages were returned, with the emails revealing three went missing.

Holgate resigned from Australia Post earlier this month after concerns were raised by government ministers, and the prime minister, about a decision to award $20,000-worth of Cartier watches to executives.