The US has recorded more than 1m new coronavirus cases in just the past 10 days as the national total soared past 10m cases amid a widespread surge – while Texas on Wednesday became the first to record a million cases as a state.

The soaring figures came as experts warned that even though successful vaccines are coming into view the White House appears to be doing little to contain a pandemic increasingly out of control.

“In the last couple of months you have seen the federal government basically throw in the towel,” Ashish Jha, dean of the Brown University School of Public Health told NBC on Wednesday morning.

He added: “There’s been no new guidance, very little effort coming from the federal government and I think that is definitely contributing to a nationwide surge.”

Daily cases for the country have steadily climbed throughout November to record a total of 1,129,463 cases in the last 10 days alone, figures from Johns Hopkins University show.

Meanwhile, Texas, America’s second-most populous state, has recorded 1,010,364 cases since the start of the pandemic in March and 19,337 deaths.

No other state has alone reached the 1m figure. And New York, which was the worst Covid-19 hotspot in the world during the initial cascade of US cases in the spring, then used restrictions to squash infections, is now seeing rates creeping up again. 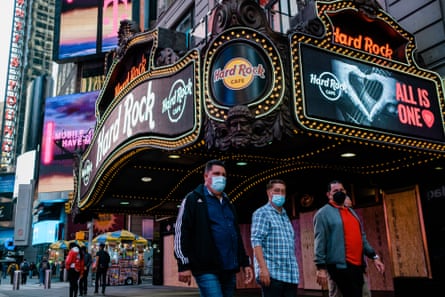 Jha said “people are getting tired” of taking precautions, even as warnings abound about family gatherings in the fast-approaching holiday season becoming spreader events.

He added that with what appears to be the good news that the world is on the cusp of approving successful vaccines, all Americans could expect to be inoculated relatively soon.

“We are about three to six months away from widespread availability of a vaccine, people need to hold on … we’re so close to actually turning the corner on the virus,” he said.

But he warned that in the meantime Americans need to restrict their Thanksgiving plans at the end of November. “This is a bit heartbreaking, because it just can’t be a normal Thanksgiving,” he said.

Hospitalisations also reached record highs. According to the Covid Tracking Project, a record 62,000 people were hospitalised on Tuesday and 17 states reported single day records for hospitalisations.

Joe Biden has already warned the US is “facing a very dark winter” and that even with Pfizer’s announcement that it has a vaccine it believes is 90% effective, 200,000 more lives could be lost in the US in the next few months.

Experts say cases could rise exponentially in the coming weeks. Michael Osterholm, director of the Centre for Infectious Disease Research and Policy at the University of Minnesota and a member of the president-elect’s Covid-19 advisory board, told CNN daily cases could soon double.

“We are watching cases increase substantially in this country far beyond, I think, what most people ever thought could happen,” he said, adding: “It will not surprise me if in the next weeks we see over 200,000 new cases a day.” 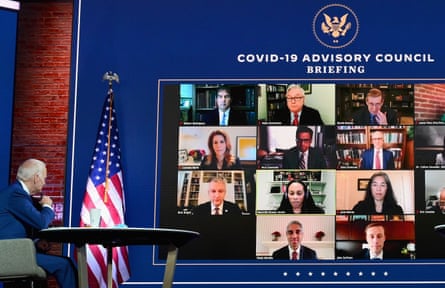 Meanwhile, Donald Trump has not made any public comments in almost a week and was golfing at the weekend while his top public health expert, who serves on the White House coronavirus taskforce, Dr Anthony Fauci, said he has not spoken to the Trump since the president had coronavirus himself and was in hospital early last month.

Trump has been complaining baselessly about a fraudulent election on Twitter and his only public outings since Biden was declared the election winner on Saturday morning have been to the golf course.

On Wednesday, he was scheduled to honor fallen soldiers at Arlington National Cemetery just outside Washington DC, despite accounts in September that he had previously called fallen and captured US service members “losers” and “suckers”.

By this week, Texas had surpassed California, which as of Tuesday had 989,432 cases, to record the highest number of positive coronavirus tests of any US state.

If it were a country, the state would be ranked 10th in the world for recorded cases, CNN reported.

In El Paso, on the Texas-Mexico border, mobile morgues have had to be brought in and field hospitals set up as hospitals are inundated with patients.

El Paso has 1,076 people hospitalised – more coronavirus patients in hospital than most states.

“We discharge one patient, and there are two that come in,” said Wanda Helgesen, executive director of regional advisory council BorderRAC, told the New York Times.

Illinois’ governor, JB Pritzker, implored people to wear a mask and not to gather in private homes, saying his state is “locked in a struggle” with Covid-19.

“I know many of us hoped not to still be fighting this deadly pandemic nine months after it revealed itself. But as winter approaches, we are locked in a struggle with the virus,” he tweeted.