A London police station was evacuated after a car crashed into the front of the building, with the driver getting out and setting fire to the road.

Metropolitan Police said a car “collided with the station office” in Edmonton at 6.58pm and that a man in his forties had been arrested on suspicion of arson and other offences.

No injuries have been reported, but specialist officers were called to the scene to examine the car while a cordon was put in place. 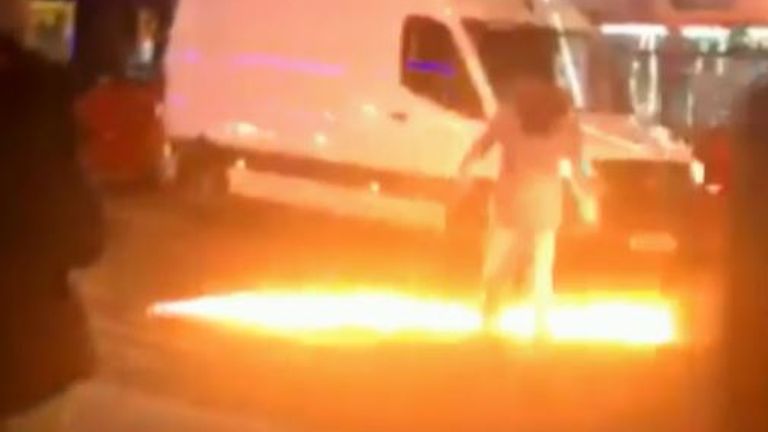 Man pours liquid and sets fire to road in Edmonton

Met Police said on Wednesday night that it was “a local investigation but is being supported by counter-terrorism officers”.

Video shows a man leaving the crashed car, walking a short distance and pouring liquid on a busy road before setting it alight.

He is quickly bundled to the floor and detained by police.

Another video shows police pull up and pin the suspect to the ground, as buses wait in the busy north London street.

One officer rushes to get a fire extinguisher from the car and puts out the flames.

Ogur Mazlum, 34, works nearby and witnessed the the car hitting the police station on Fore Street.

He said the suspect had crashed through the glass but was unable to get through a second barrier.

His wife Serife described what he saw as Mr Mazlum speaks limited English.

“He was insisting on trying to get inside, but the glass door wouldn’t break anymore so he couldn’t get any closer,” she told PA.

“Then he casually got out of the car with a tank of petrol. He poured it down from the car into the middle of the road and then he just set it on fire.”

Mrs Mazlum said another man ran across the street to intervene after the suspect started the fire.

“He pinned (the driver) to the ground just as the police were arriving,” she said.

“So by the time the police came and got out of the cars, the citizen had already slammed him to the ground.”

By 10.15pm the cordon around the station had been reduced and police officers were allowed back in.

Mr Khan tweeted: “I’m grateful to the police officers and other emergency services who brought the situation under control and continue to investigate the incident.”