Vemula Deena lives in one of the tin huts strung along a narrow lane in the heart of Vijayawada, the business capital of Andhra Pradesh, in the south-east of India. Her parents are construction labourers. Vemula is 13 and wants to be a politician, enamoured of the spotless white kurta-pyjamas they wear and their public speaking.

But her school has closed its doors in the face of the Covid pandemic and gone online, effectively shutting her out. Vemula continues to practise her oration as she does her household chores. 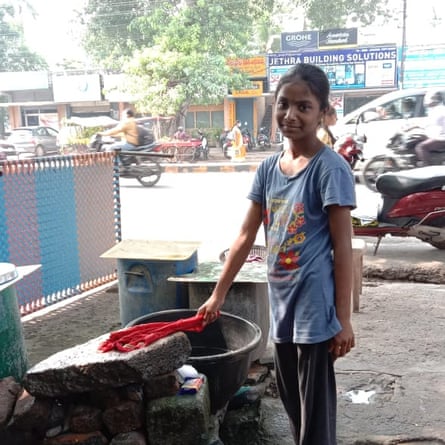 Aviti Keerthana, 9, has been trying to keep up with lessons via television. Photograph: Swati Sanyal Tarafdar

On the fringes of Vijayawada, closer to the vast expanse where the city’s rubbish is dumped, nine-year-old Aviti Keerthana’s parents work as waste pickers. Aviti dreams of becoming a doctor. The area where she lives has no electricity, and the family has one mobile phone. When her school moved online this year, she too was left out until Jones Manikonda, 47, a local philanthropist, stepped in to help.

A survey in July by Save the Children reported that children in 62% of Indian households have discontinued their education amid coronavirus. India has around 320 million children in 1.5 million schools, and 70% are government-run. Few have access to online classes.

Schools have been able to teach using WhatsApp groups or video conferencing, but there is a wide digital divide. A 2017–18 survey found that 23.8% of Indian households had access to the internet, and 12.5% of students had access to smartphones. Only 8% of households with children have a computer plus internet connection. Online education is niche in India.

“It’s been painful and astonishing at the same time to come to terms with the reality that despite living in the centre of a well-developed, wealthy city, there could be people who spend days without a phone or internet, or even something as basic as electricity and drinking water, things that most of us had taken for granted,” says Manikonda.

Manikonda installed a television in Aviti’s neighbourhood so children could watch teachers deliver lessons over government-run channels. But most areas she visited had no electricity. “Putting up television sets was not the option in these. We had to do something else. That’s when we came up with the idea of temporary learning camps,” she says.

Using open-air classrooms, plastic sheets for a floor, whiteboards and pens, and volunteers who hopped from one centre to another across the city, children were able to get back to studying. The learning centres are growing, supported by donors from far and near. There are already 15 across the city with more than 750 students enrolled. “Now their mothers are willing to learn English to be able to sign their names,” Manikonda says. 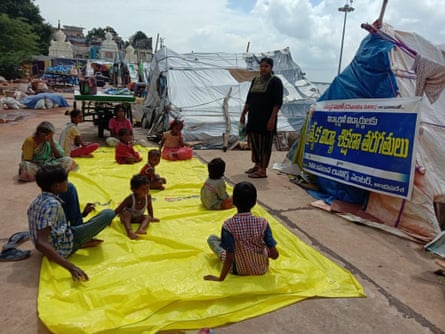 In other parts of the country, teachers went around villages delivering lessons over speakers. Taking the cue, others embraced the idea.

In Guwahati, Assam, in the north-east of India, Akshar Forum, a school for very poor children who often have to work for a living, is struggling to help its students keep up.

“Almost 60% of our students come from families that have no smartphone or internet connection, and sometimes no electricity,” says its founder, Parmita Sarma. “We prepare worksheets every week on all subjects. Parents come once a week to submit completed worksheets from the previous week and collect the new bunch for the coming week. One parent collects the sheets for the entire neighbourhood to minimise crowding,” she says.

“This is not a solution at all. We are trying to do what we can to keep going, which is probably less than 5% of what we could have achieved during a normal school mid-year.

“My students come from troubled backgrounds, they come to school to escape from their lives. We don’t close for summer and winter breaks because the kids want to come to school. But now they are stuck in the home dealing with parents who have also lost their jobs, which means there’s more frustration, more abuse, and the children’s mental health problems have increased by at least tenfold.” 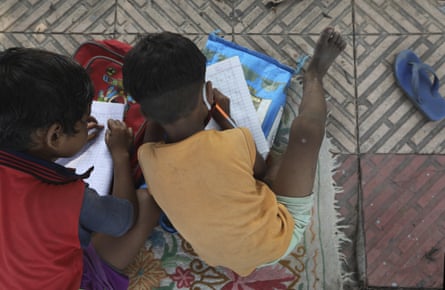 In Tamil Nadu, the NalandaWay Foundation, an educational charity, has a dedicated helpline. “This group between 14 and 17 years of age was preparing for their exams, and now they are faced with uncertainty. For their emotional wellbeing and to respond to their practical queries, we started the helpline,” says founder Sriram V Ayer.

From April to May, the foundation delivered learning kits to 27,000 under-10s. “It’s been years of work to bring the children to school and we can’t simply let that undo,” he says.