Monday
As many of you will know, my default responses to most situations are mistrust and despair. Yet today I listened to the news and felt something approaching hope. My mood had lifted over the weekend when it became clear Joe Biden had won the US presidential election and that the world was going to be a safer and more stable place after four years of Donald Trump. That feeling was deepened this morning when I heard that there was a genuine contender for a successful coronavirus vaccine in the near future. There’s sure to be a biopic of Uğur Şahin and Özlem Türeci – the husband and wife team behind BioNTech – already in development. Suddenly it felt like there was a way back to normality that didn’t involve repeated lockdowns and testing. It would be so nice to wake up in the morning without a feeling of both intense anxiety and loneliness. I have missed my work friends and colleagues dreadfully and hadn’t realised how much I depended on them. Then, of course, I had to spoil the moment by doing the maths. The UK has secured 40m doses of the Pfizer/BioNTech vaccine – enough for 20 million people – and I wasn’t sure whether I would make the cut as I was only in tier 8 (out of 11) in order of priority to get the jab. I then read that even working flat out, the government estimated it would only be able to give about 1m vaccinations a week, meaning that it would take the best part of a year to roll out the current stocks – even if other vaccines proved successful in the interim. Still, the hope was nice while it lasted.

Tuesday
Today is the 25th birthday of our son – our youngest child – and somehow it feels far more significant than either his 18th or his 21st because back then he was at university and had yet to give much thought to what sort of life or career he might want. Robbie is now indisputably an adult – he’s far more grown up and sorted than I was at his age – and though I take pleasure and pride in the man he’s become I can’t help missing the younger, more dependent version who was happy, among other things, to come along to football matches with me. I’m also not entirely sure where all the intervening years have gone though his actual birth is etched in my memory as, like his sister before him, he was whisked off to intensive care moments after he was born – though thankfully he wasn’t in anything like the critical state Anna had been. Still, at least it has never been hard knowing what to give Robbie for his birthday as he’s always in need of cash. All year he has been saving for the moment he turned 25 and his car insurance became cheaper. What he really wants is a van (a 2004 Toyota Hiace with 100,000 miles on the clock) in which he and his girlfriend can bung some surfboards and a sleeping bag so they can spend their weekends and holidays at campsites by the sea with a few other friends in their vans. Now the moment has arrived when that possibility becomes more of a financial reality and he has spent much of the last month eyeing up potential contenders. May the van of his dreams rise up to meet him.

Wednesday
I support the second lockdown – though I would have preferred it to have been introduced when Sage recommended it – but the novelty has already worn off after a week. I’ve done everything that needs doing in the garden (the bananas are safely wrapped in their fleeces for winter) and my entire life seems to revolve around the television. During the daytime I follow what’s going on in Westminster on Parliament TV and in the evenings my wife are on a non-stop diet of dramas and documentaries. The undoubted highlight at the moment is Sky Atlantic’s The Undoing: the acting is superb – Hugh Grant seems to get better and better with age, though Donald Sutherland, at 85, is still the classiest actor on the show – and the storyline is gripping. Each of the three episodes has ended on a seemingly game-changing cliffhanger and even though we must have already met the murderer, I don’t have a clue who it is. My documentary viewing veers between hospital emergencies, endless second world war programmes – I can’t help feeling the BBC4 schedulers are out to remind us that however bad we feel things are now they could be a whole lot worse – and Cornwall. By my count, this is either the third or fourth series about Cornwall in the last 18 months, which suits me fine as I have a need for something unchallenging and familiar occasionally and I would happily watch images of Cornish landscapes even without a presenter or a voiceover. Each series claims to be showing us the real Cornwall behind the holiday destination, but it’s reached the point where I’ve become sure that some of the same characters are starting to appear on the different shows. There may be high unemployment in the county, but at least there are a growing number of opportunities in TV.

Thursday
As the rest of us considered the fact that the UK had become the first European country to exceed 50,000 coronavirus deaths, No 10 was engaged in its own internal warfare, culminating in the resignation of its director of communications, Lee Cain. Having begun his career by dressing up as a chicken for the Daily Mirror and chasing David Cameron around the country during the 2010 election, Cain went on to become a close ally of Dominic Cummings as part of the Vote Leave campaign. And when Boris Johnson became prime minister, the old Vote Leave clique were rewarded for their loyalty with plum jobs in Downing Street. Quite why Cain has chosen to quit now is not entirely clear. He was known to have been unhappy that Allegra Stratton, the prime minister’s soon-to-be press secretary who will take the daily televised briefings, would not be reporting directly to him and had demanded he be promoted to No 10 chief of staff. Here it gets even more confusing, because some insiders say Stratton and Johnson’s fiancee, Carrie Symonds, were both unhappy about Cain’s macho style – he’s never knowingly gone out of his way to avoid a fight – and had persuaded Johnson not to offer him the job. Cain meanwhile claims that Johnson did offer him the job he wanted but that he had, for reasons unknown, turned it down. These sorts of spats are normally resolved in organisations by a judicious change of title. Leave Cain in the same role but give him the job description of Executive Chief of Staff (Global) and that way everyone stays happy and onside. Except it doesn’t appear to have worked in this case. Nor does it seem that the prime minister played much role in deciding who was to get what job. Rather he seems to have left it to Stratton and Symonds, who herself was sacked from her communications job at Tory HQ, to decide. A curious way to run a government. Now we hear Cummings is also to leave before Christmas, despite having hung on after causing massive reputational damage to both himself and Johnson by taking a wrecking ball to the government’s coronavirus comms strategy with his Durham safari back in April. So now, with no Brexit trade deal in sight despite there being fewer than 50 days until the 31 December deadline, there will be no Vote Leave people left in Downing St when the the UK leaves the EU to manage the aftermath and pick up the pieces. While few will feel anything but relief and joy at his departure, the government has seldom looked quite so clueless or lacking in any form of responsibility. Classic Dom.

Friday
It’s going to be hard for anyone to beat the Republican party’s PR own goal in choosing to hold a press conference at the Four Seasons Total Landscaping centre in Philadelphia rather than at the Four Seasons hotel. Watching Rudy Giuliani standing between a sex shop and a crematorium, still trying to maintain the fiction that Donald Trump had won, will be one of my favourite memories of the US election. I’m not sure the Republicans – or the hotel group for that matter – will ever fully recover. 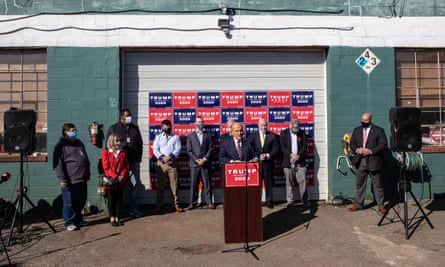 Giuliani at Four Seasons Total Landscaping: ‘To my left are the ashes of Trump’s presidential campaign.’ Photograph: Chris McGrath/Getty Images

But here in the UK, we shouldn’t be afraid to acknowledge our own bunch of idiots who this week have gone out of their way to make themselves look stupid. We’ve had the head of the Football Association, Greg Clarke, proving he knows nothing about diversity and inclusiveness at a select committee. We’ve had Capt Matt Hancock promising to personally fly in vaccine supplies from Belgium if there are Brexit delays at the border, despite having failed to let Alok Sharma in on his cunning plan before the Downing Street press conference a few hours earlier. Then we’ve had the “northern powerhouse” minister Jake Berry insisting that northerners prefer football while southerners go to the ballet and opera. Has he not noticed that there are a fair number of well-supported football teams south of Manchester or that some of our greatest opera singers come from the north? Or that there are plenty of people, like me, who are passionate about both. Maybe that makes me a Midlander. But while I have just about got used to watching football in empty stadiums on telly – I guess I’ve had decades of experience of TV football watching to help me prepare – I can’t bring myself to watch opera on TV. I just can’t emotionally connect with the singers in a way that’s meaningful: too much of the performance gets lost on the small screen. There will be tears when I can finally see live opera again.

Coronavirus: New list reveals who will get vaccine first – The Independent

Coronavirus: 2.5 million of most vulnerable people in England to be sent vitamin D pills – Euronews