While a good book was the salvation of many Australians during the coronavirus lockdown, Australian writers have been reduced to “absolutely dire economic difficulty” by the pandemic, Charlotte Wood told a federal parliamentary inquiry on Friday.

Wood, one of the country’s leading authors, who penned The Natural Way of Things and The Weekend, said well-established overseas writers appeared to be the main beneficiaries of book sales during the lockdown, not Australian writers.

“Our incomes are appallingly low and falling steeply,” Wood told the inquiry in Canberra into Australia’s creative and cultural industries and institutions.

While a figure of $13,000 had been widely quoted as the average annual earnings of an Australian writer, that figure was now probably more like $4,000, she said.

“Covid is destroying the lives of writers in many ways – through the loss of their day jobs in lots of cases, but also by obliterating three major income streams for writers outside their books: public speaking, university teaching and freelance writing.

“Jobkeeper is literally at the moment keeping many writers alive, and I don’t know what will happen when it runs out … and there was nothing in the government’s Covid rescue package for writers who are not attached to organisations.”

Wood said that even before the pandemic hit, government funding for the literary arts had “fallen to rock bottom”. Australia Council funding for literature had fallen 44% in the past six years, she said. 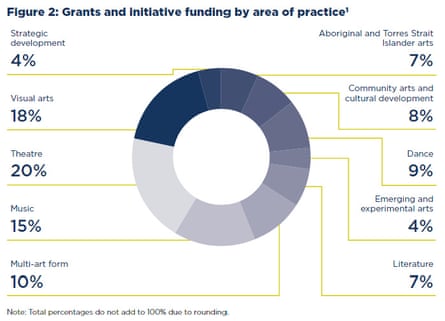 “The benefit of books to a flourishing society has been thoroughly documented worldwide. But the people who make those books now absolutely desperately need your help.”

In a submission sent to the inquiry, the Australian Society of Authors said author earnings had become “disastrously low”.

More than half received no advances for their works, while for those who did, only one in four received an advance that was more than $5,000.

Wood was joined but two other acclaimed writers, Helen Garner and Christos Tsiolkas, at the phone-in hearing in Canberra.

Garner and Tsiolkas both stressed the urgent need for increased financial support for local literature, particularly for emerging writers.

Having the time to think, observe and read extensively was vital in honing a writer’s skills, Garner said – something she had the advantage of early in her career thanks to government grants.

“[Writing is] such a crucial human activity that I’m sometimes quite amazed at how how little value it seems to be given,” she said.

Tsiolkas said Australian authors “want to be able to write what we want to write without being told what to write”.

“But we are here today because we think it’s really important to make all of you understand how important this question of funding and timing is,” he said.

A cultural economist at Macquarie University, Prof David Throsby, told the inquiry earlier that a number of comparable countries, including the UK, Canada and New Zealand, offered stronger support for literature through their Australia Council equivalents.

“I think we should be alert to the developments in the international sphere about support for not just the book industry but the cultural sector more generally, to see to what extent we are doing well,” he said.

“We used to be much stronger in terms of federal government support for culture per head of population … and that has declined.

“One thing we can say is that we’re no longer the leader in this field.”

Independent arts and culture think-tank A New Approach told the inquiry that 9% of the Australian population was now working in cultural or creative industries, compared with just 5.5% in 2016. The creative workforce was growing at nearly twice the rate of the overall Australian workforce, said the ANA’s program director, Kate Fielding.

Yet an ANA analysis of data showed that among 33 OECD countries, Australia ranked 26th in the level of investment in arts and culture from all three tiers of government. The OECD average was 1.11% of GDP compared with Australia’s 0.77%.

The lack of a contemporary approach by governments to funding was a source of frustration and affected confidence in philanthropic investment, Fielding said.

The hearings continue in Canberra on 4 December.