With each new crew launch from the U.S. comes the inevitable questions: Why all the weather rules?  What are the vehicle’s abort modes and how will it perform a launch abort and aim itself to a predetermined location in the Atlantic Ocean stretching from the Kennedy Space Center across to the western Irish coast?

The Crew-1 mission of SpaceX’s Dragon 2 capsule is contending with these questions, with its launch already delayed from Saturday because of weather.  The mission is currently set to launch at 19:27 EST (00:27 UTC) on Sunday, 15 November (Monday, 16 November UTC) from LC-39A in Florida to bring Mike Hopkins, Victor Glover, Shannon Walker, and Soichi Noguchi to the International Space Station.

Why do NASA, the 45th Space Wing of the Space Force, their safety officers, and all launch providers make such a big deal about the weather?  Who cares if it’s raining 18 km from the pad when the safety rules say rain cannot be closer than 18.5 km?  Isn’t that close enough?

The answers to these questions lie in U.S. rocket history and the sometimes painful ways we have learned the lessons of what happens when launch officers don’t listen to the weather and what the vehicle is built to handle.

Hundreds and thousands of hours of training, testing and preparation go into readying a rocket, satellite, and crew (if it’s a human flight) for each mission.  The flight hardware must operate and perform flawlessly through the launch count to ignition.

After all of that hard work, there is one item no one can control, and that’s the weather.

Launch Commit Criteria weather is a detailed set of guidelines that outlines the environmental limits a rocket and spacecraft can experience during ascent and landing to ensure a successful end of mission. 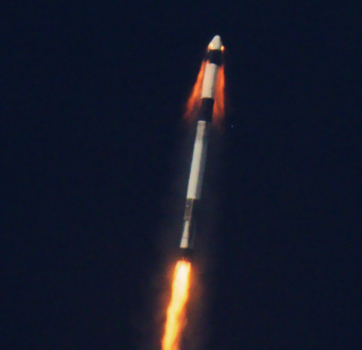 Crew Dragon aborts away from a Falcon 9 rocket during the In-Flight Abort test in January 2020. (Credit: SpaceX)

And weather Launch Commit Criteria must also take into account not just the 45th Space Wing’s overall Range safety requirements for the protection of people on land, at sea, and in the air, but also the rocket-specific weather requirements determined by the company that owns and operates the vehicle.

Some of those launch operator-specific weather criteria include how close rain can be to the pad at launch, wind speed and direction, upper level wind shear limits, and others.

In addition to vehicle specific rules, there are also Range safety requirements launch providers don’t get any input on.  They are the rules in place to protect space center workers and the viewing public on land, in the air, and at sea.

They include some obvious things like lightning rules to make sure a lightning strike doesn’t destroy a vehicle’s electronics and make it impossible to destroy if it flies off course.

But there are less-known rules that come into effect that cause launch teams to have to scrub for lightning even when there is no lightning anywhere near the launch pad.

This is an example of a Range weather rule that exists from experience.

It was during Apollo 12 when Pete Conrad, Richard Gordon, and Alan Bean’s Saturn V was struck twice by lightning in the first minute of flight.

The strikes resulted in the failure of a number of critical flight systems, including the Apollo Command and Service Module’s fuel cells and all navigation displays for the crew.  Mission Control received garbled telemetry and communication from the rocket and crew.

Vehicle was struck by lightning during first stage.

“I think we need to do a little more all-weather testing” – Commander Pete Conrad.

Thankfully, the Saturn V’s flight computer, isolated from the Apollo spacecraft, was not affected by the strikes and kept functioning as if nothing had happened.

Saving the mission was made possible by a single flight controller who remembered a strange sequence of numbers teams had asked for his help in determining where they were coming from.  The controller eventually traced them to the Signal Conditioning Equipment (SCE) on the Apollo Command and Service Module.

Inside the Apollo 12 capsule, there was an “SCE” button that had to be pressed to start bringing things back online.  The button was completely unknown to the Flight Director and the mission’s Commander, but Al Bean remembered it from a completely different training simulation.

With telemetry and information restored, the mission continued on to orbit, where a full checkout of the spacecraft resulted in a successful lunar landing mission and return.

What Apollo 12 revealed was a better understanding of how rockets can trigger lightning even when naturally-occurring lightning is not possible.

According to a February 1970 NASA assessment of the Apollo 12 lightning event, “Lightning can be triggered when an aerospace vehicle with a conductive surface and an ionized exhaust plume distorts the electrical field equipotential lines, thus increasing the potential gradient at the top of the vehicle and below the exhaust plume.”

This is a very technical way of saying that rockets act as giant conductors when they launch through the atmosphere, and that conduction lowers the total amount of electrical charge needed in the atmosphere to trigger a lightning strike even when all of the natural conditions needed for lightning are not present. 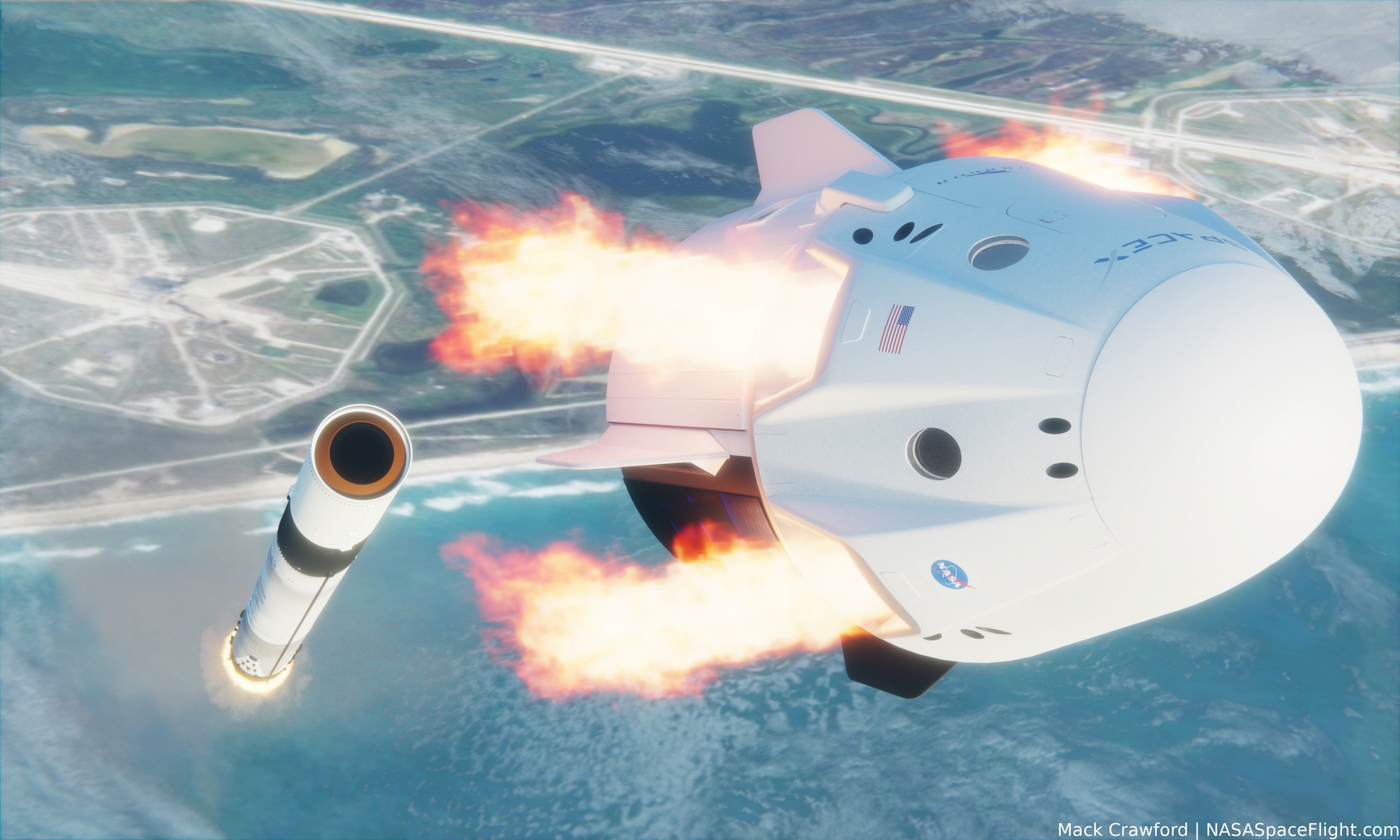 Triggered lightning conditions can easily be met when a rocket flies through a non-lightning producing cumulus cloud or through thick clouds in general.

In this event, a launch would be scrubbed for lightning (technically for the cumulus/thick cloud rule) even though no lightning is in the launch area.

For launches without people, the launch weather is largely confined to the conditions in the area around the pad.  But once a crew is onboard, an additional commit criteria for abort location weather is needed.

The Crew Dragon Resilience has eight abort modes for Crew-1, one on the pad and seven in-flight.

The modes will be nearly identical — with minor timing adjustments for this mission’s specific mass properties — to those that Bob Behnken and Doug Hurley would have used on Demo-2 in May 2020 should that flight have encountered an issue during launch.

After Mike, Victor, Shannon, and Soichi board Crew Dragon, the hatch will be closed and the vehicle prepared for fueling.

As with Demo-2, the Falcon 9 will be loaded with propellant after the crew are onboard.  This necessitates pulling the crew access arm back at approximately T-42 minutes and activating Resilience’s launch abort system at T-38 minutes.

Fueling will begin at T-35 minutes, at which point Crew Dragon’s SuperDraco abort engines will be standing by to quickly pull the craft and crew away from the Falcon 9 should the unlikely need to do so arise.

A pad abort during fueling or engine start would result in Crew Dragon splashing down about 1.2 km east of the launch site, just offshore in the Atlantic Ocean.

Once liftoff occurs, the abort landing locations change with every passing second of flight, ultimately resulting in Crew Dragon requiring a potential landing off the western coast of Ireland.

NASA and SpaceX have approximately 50 predetermined abort splashdown locations that will be monitored for the Crew-1 launch, with each of the 50 locations corresponding to one of the seven in-flight abort modes for Resilience.

An undisclosed percentage of abort landing locations in each of the seven abort zones will need to be “go” for landing/recovery weather to commit to launch on Sunday evening local time at Kennedy.

The seven in-flight abort modes and the times after launch they begin are:

The Falcon 9’s second stage will shutdown 8 minutes 48 seconds into flight, delivering the Crew-1 astronauts into a preliminary orbit of approximately 210 km.

The stage 1a abort starts at the moment of liftoff and would result in a splashdown stretching from Florida to the coast of North Carolina.

Recovery teams will be stationed in Florida and North Carolina, allowing search and rescue crews to reach Dragon within an hour should an abort occur in this region of flight.

Abort stage 1b, still during first stage flight, stretches until first stage cutoff and would result in a landing off the coast of Virginia.

For both stage 1a and 1b aborts, Crew Dragon would use its SuperDraco engines to abort away from Falcon 9 before its regular Draco thrusters reorient and stabilize the capsule before parachute deployment.

Beginning with first stage shutdown, the longest of the abort modes begins with stage 2a.

This stretches from T+2 minutes 32 seconds to T+8 minutes 05 seconds and would result in a landing in the Atlantic Ocean anywhere from off the coast of Delaware stretching northward to off the Canadian Maritime Province of New Brunswick and northward off Nova Scotia. 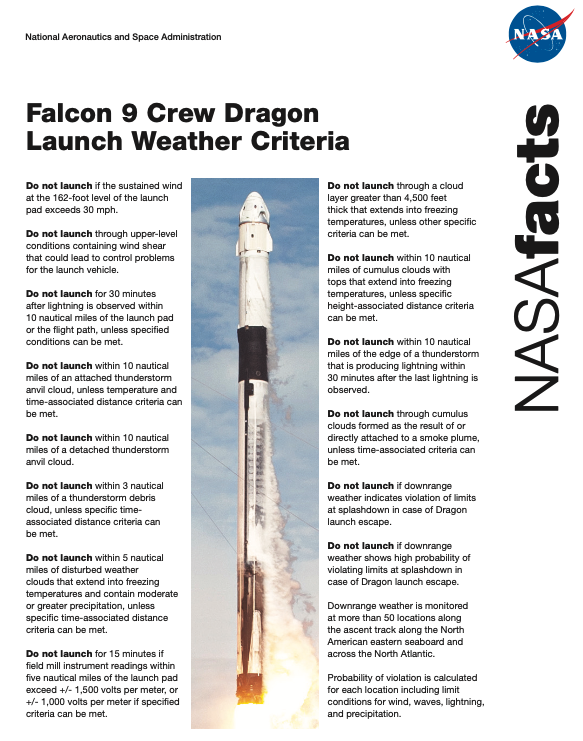 During a stage 2a abort, Dragon would separate away from the second stage of the Falcon 9 followed by a series of prograde burns to allow Crew Dragon to reach a very specific splashdown location in the North Atlantic.

Abort stage 2b then follows, a short window which would result in a retrograde burn of the Resilience’s engines after popping off the second stage to reach a specific abort location past the province of Nova Scotia.

The following abort mode is stage 2c, which jumps all the way across the Atlantic to just off the western coast of Ireland. It would require a prograde burn of Crew Dragon’s engines to allow the capsule to reach its abort splashdown target.

Abort stage 2d would also see Crew Dragon land in the Atlantic off the western coast of Ireland, but would require a retrograde burn to bring the crew down in this zone.

The final stage 2e abort is reserved for minor performance issues in the final two seconds of orbital ascent.

This is essentially an Abort To Orbit, where Crew Dragon would either fire its regular Draco thrusters to achieve orbit or would be in what is known as a lower-than-planned-but-safe orbit where it could simply continue its mission.

The various abort modes will be called up to the crew during launch as each new abort stage is reached.

Xiaomi announces the Mi 11 ahead of tipped January launch; to feature the new Snapdragon 888 – Notebookcheck.net

Xiaomi announces the Mi 11 ahead of tipped January launch; to feature the new Snapdragon 888 – Notebookcheck.net

Salesforce to buy Slack in $27.7bn deal aimed at competing with Microsoft – The Guardian