Hundreds of people had started arriving in Perth and more were crossing into Western Australia by road after the scrapping of the state’s Covid-19 hard border closure on Saturday.

The move came as Victoria recorded its 15th day straight with no coronavirus cases or deaths.

South Australia reported three new cases on Saturday, all people who recently arrived from overseas, while Queensland reported two new cases of coronavirus – both detected in people in hotel quarantine.

Eleven interstate flights arrived in WA on Saturday, bringing in about 1,300 people. By mid-morning on Saturday another 205 had crossed into WA from South Australia at Eucla and 97 had travelled through Kununurra from the Northern Territory.

Only people coming from NSW or Victoria will be required to self-quarantine for 14 days and have a coronavirus test on day 11. But all travellers will be asked to complete an online declaration and will be screened, including a temperature check, when they arrive.

About 3,000 people had applied online to return to WA since the system went live late on Friday night. 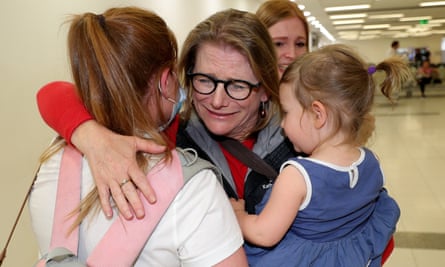 The police assistant commissioner, Paul Steel, said the processes were necessary to allow people to return to the state but still keep Covid-19 at bay.

“Don’t expect that you can just get off an aircraft and walk through,” he said. “We’ll be as efficient and effective as we can.”

Police warned anyone failing to disclose recently travelling through NSW or Victoria faced a large fine or potential imprisonment.

Just three active coronavirus cases remained across Victoria – two in the local government region of Greater Dandenong and one in Casey.

Saturday’s figures came after 14,614 tests were processed in 24 hours.

The deputy chief health officer, Allen Cheng, described the state’s run of zero cases as “about as good as it can get”.

“We just want to make sure that there’s nothing we’re missing there,” he said. “This is not over.”

Health authorities in NSW released a list of three key “venues of concern” in Auckland as they checked arrivals from New Zealand since 5 November.

Authorities had messaged 455 people who arrived from New Zealand since then after a “mystery case” emerged in Auckland.

A fuller list of locations was released by NZ health authorities.

NSW Health was also urging people in the Rouse Hill area to get tested if they showed even the mildest of symptoms after virus traces were detected in sewage from a catchment where 120,000 people live.

The new cases in South Australia were two women in their 20s and a woman in her 50s, who were all in hotel quarantine. Their cases took the state’s total since the start of the pandemic to 522 but only 17 were still considered active infections.

South Australia was set to lift all border restrictions on 1 December, with no requirement for travellers to quarantine in hotels or at home.

NSW announced last week it would reopen its border with Victoria on 23 November.

Victoria’s death toll from the virus stood at 819, with the national figure at 907.