It’s said the name Hove derives from the old English hufe, meaning shelter or coverage. But it did not feel sheltered on Saturday morning. A biting wind whipped in from a sea that looked, in James Joyce’s memorable phrase, “scrotumtightening”. Overhead a dull rain leaked from a dishcloth-grey sky.

Yet the promenade was filled with hundreds of walkers, seemingly oblivious to the elements. Welcome to the second lockdown, a conspicuously more external event than its predecessor.

“I remember walking along here during the first lockdown,” said publican Sue Morley, standing outside Starbucks on the high street, “and there was no one around. No cars. No people. Nothing. Now it’s just like normal, whatever normal is.”

Normality, as we’ve come to learn, is a relative concept. But first time around there was something rather spectral and unnerving about the UK’s near-abandoned streets, as if a neutron bomb had gone off, and the only people to survive were deeply suspicious of each other.

It was a matter of pandemic etiquette for pedestrians to give a wide berth to anyone they encountered, often walking into the road to avoid the threat of aerosol contact. And there was that unearthly, rather blissful silence that announced the sudden absence of cars.

Now cars are bumper to bumper again and everyone’s brushing shoulders with strangers as if in unconscious search of human contact.

“I’m fed up,” complained Helen Kaouris. “He’s not,” she added, gesturing to her husband Michael.

“I quite enjoy it,” Michael admitted, sheepishly. 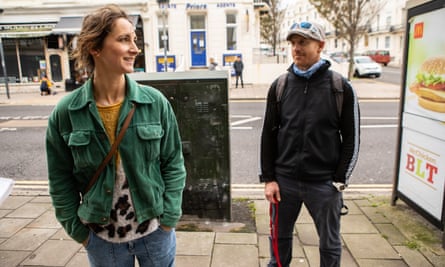 “It’s just boring,” said Kate McDonald. “It’s winter and there’s nowhere to go. I don’t think people are obeying this one as much. That’s why the seafront is absolutely packed.”

Almost everyone complained about the weather, unfavourably contrasting it with the dreamy premature heatwave that illuminated the dark days of last spring, and which gradually encouraged people to venture out.

The government rules still stipulate that everyone should stay at home, but the exemptions are so numerous that few seem to be taking the prohibition as anything but a loose guide for other people.

“It’s messy,” said Sam Parsons, braving the wind on the seafront. “It’s like the idea of essential shopping. What’s essential? In M&S, it’s not just food that you can buy, but all the other stuff too. Which isn’t very fair on other shops.”

I’m starting to think that it’s impinging on my first world liberties. And I do worry about the long-term effects on the economy.

Certainly the fact that most shops are closed doesn’t seem to have affected the footfall on Hove’s main shopping drag. Some punters were window-shopping, staring at ultra-high definition televisions in Sevenoaks Sound & Vision. Others were queuing up outside the countless coffee shops that were doing a roaring takeaway trade.

The deep-seated consumerist instinct to get out on a Saturday morning and spend money, or at least prep for it, does not appear to have been damaged by this prolonged pandemic. Yet everyone has had to make the difficult adjustment to an open-ended sense of limitations. 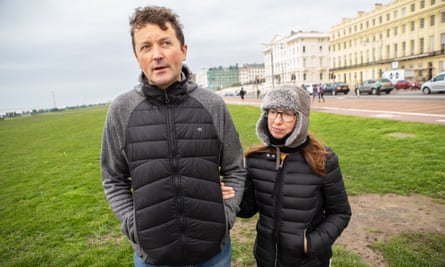 ‘You realise it’s not going to go away’: Daniel and Michaela Bridger. Photograph: Antonio Olmos/The Observer

“First time round we thought we’d stamp it out,” said Michaela Bridger. “Now you realise it’s not going to go away. It’s depressing.”

Her husband, Daniel, said he was conscious that in the first lockdown there was a unified national spirit in the face of an invisible enemy. But that had waned, leaving a denuded sense of collective purpose. “I’m starting to think that it’s impinging on my first world liberties,” he said with deliberate irony. “And I do worry about the long-term effects on the economy.”

The general sentiment was that the government had lost its ability to motivate the population, because no one much believed in its vision or knew what it was.

“I don’t think people have much faith in the government,” said Freya Lucks, who was visiting her boyfriend Doran Good in Brighton.

“My friends are not observing this lockdown as strictly,” said Good. “They’re much more likely to hang out in groups now.”

And do what? “Skateboard.” 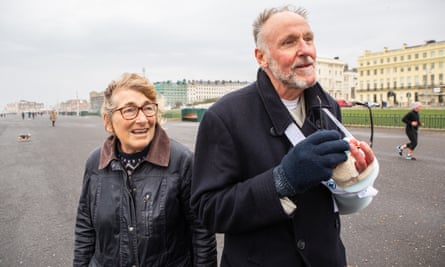 But no one was on skateboards on the promenade. They were all just walking, heads down, with gritted teeth, set with dogged determination against the wind. There wasn’t very much else to do. In St Ann’s Well Gardens, a small park just back from the seafront, eight tennis courts stood empty as small groups of people, in their twos, threes and fours, walked shoulder-to-shoulder around the park.

Why playing tennis ten yards apart is seen as more likely to spread the virus than walking inches away from one another is a mystery that science is highly unlikely to solve. By the same token, wide-open golf fairways are officially viewed as petri dishes of contagion, yet bunched queues outside coffee shops are of minimal concern.

These are the anomalies that seem to have been created to give us something to talk about as we walk around and around, wondering whether we’re going to watch another episode of The Queen’s Gambit this evening, and if we’ve run out of gin.

The paradox of the first lockdown was that the nation was united in staying apart. This time there’s no grand overarching belief, and people are coming together to share the fact that they’re all in the same leaky boat, and that it has an uncertain destination.

“I find that I’m talking to strangers a lot more,” said Sally Swann, an art therapist.

In a sense no one is a stranger in this lockdown. There isn’t the same anxiety about what others might be carrying. In its place is a shared sense of boredom, and the bonding knowledge that everyone’s in it together, even if no one can say any longer what “it” is.