Jerry Babb and Robert Beckner stood on a brick pedestal and looked on at a crowd of tens of thousands, gathered by the Freedom Plaza for the Million Maga March.

“America is beautiful,” Babb said, a sea of Trump flags in front of him. “And America is back.”

The crowd sang the national anthem, sporadically erupting in cheers for the president. The rally began at the Freedom Plaza on Saturday morning, and would culminate in a crowd of hundreds and thousands by late afternoon.

A large number of protesters had travelled cross-country to show their support for Donald Trump, from as far as Los Angeles and Seattle. One group, with the banner “Korean Americans Support 2020 President Trump”, said they came in from South Korea for the election and had showed up to support their man again on Saturday.

Craig Johnson, who had driven 14 hours from Florida, was giving out dollar bills featuring a photo of Melania Trump.

“Isn’t she gorgeous?” he said to protesters walking by. “That’s my first lady.”

“I want this nightmare to end,” he told the Guardian. “I haven’t slept much since the election because I’m sad that Donald Trump is not our president. He’s gonna be our president though.”

Johnson wasn’t the only one with such strong belief in Trump’s claims, made without evidence, that the election was rigged – and in his refusal to concede to Joe Biden after all major media organisations called the race for the Democrat, by 306-232 in the electoral college. 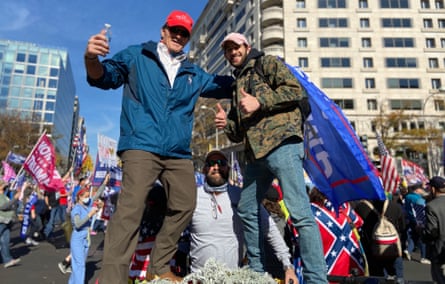 Babb, 60, said Trump was the best president he’d ever had, one who “did everything he said he would”.

Beckner added that he has started a petition for a recount and already had 18,000 signatures. He was confident a recount would happen, and that Trump would “absolutely” emerge as the winner.

Many supporters were fueled by a combination of mistrust of state ballot counts and the media, and a conviction that Trump had, in fact, won the presidency – it just wasn’t being reported. Stevan Roknic, who had come from Hobart, Indiana, said it was “mysterious” how Trump had been reported to have lost the election.

“Trump was winning, he had the election in a landslide,” Roknic said. “And then in the middle of the night they stopped doing the count, and mysteriously all these votes showed up for Joe Biden. I don’t buy it.”

Roknic, among others, said he believed the coronavirus pandemic was “orchestrated” and had a role in turning the election to the Democrats.

There was a heavy presence of minority groups, mainly Asian Americans. But Alexandira Juarez, from Buxton, Maine, wore a “Latinas for Trump” t-shirt and said: “I absolutely love Trump and what he’s done for this country, and he got robbed from four more years.”

Asked about the issue of child separation, one of the most controversial of Trump’s policies, and which predominantly affected Latin American migrants at the southern border, Juarez said she didn’t believe they were actually separated.

Tony Capo, an Egyptian American pharmacy student from New York, said he was attending the rally just to support an election audit. He went from being a Democrat in 2016 to supporting Trump this time.

“We just want an audit for the vote, I’m not trying to say there is voter fraud necessarily,” he said. “But the fact that some high officials are denying an audit, is ludicrous.” 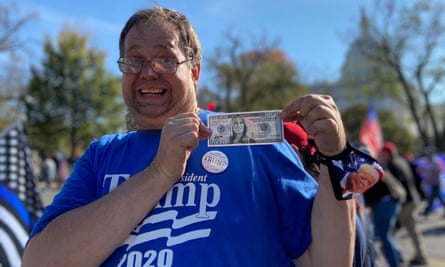 A Muslim, he said Trump had condemned white supremacists and racism, and that Trump’s Muslim ban wasn’t a ban against Muslims, but happened to be concern countries with large Muslim populations. As he spoke, the crowd behind him broke into a “Four More Years!” chant. Capo cheered them on.

Dennis and Mikami Lam, a Hongkonger American couple, had come from Los Angeles. They were celebrating outside the supreme court because of Trump’s policy towards China, which they said was beneficial for Hong Kong.

By late afternoon, Trump supporters thronged outside the supreme court, where they were met by a crowd of counter-protesters. The two groups were separated by a barricade and law enforcement officers, but still briefly collided after rumors spread that members of the Proud Boys extremist group were present. Some supporters were seen cheering for Proud Boys and wearing Proud Boys hats. The Guardian could not independently verify if people wearing Proud Boys gear were actually from the group.

The crowd contained people from a range of backgrounds and communities. Some screamed obscenities at counter-protesters. But some were all smiles, in the capital merely to celebrate.