An emerging mafia that ran a protection racket extorting €50 (£45) a coffin from funeral homes has been raided by hundreds of police in one of the largest ever such busts in the southern Italian region of Puglia.

Dawn raids centred on the city of Foggia led to the arrest of some 40 alleged members of a criminal organisation described by Italian authorities as the country’s “number one public enemy”.

Investigators have long recognised the threat from the four established mafia groupings – Cosa Nostra in Sicily, the ’Ndrangheta in Calabria, the Camorra in Naples and the Sacra Corona Unita in Puglia – but have become increasingly concerned by the strength of the Foggia organisation, which some have called the “fifth mafia”.

The suspects, including the clan leaders Federico Trisciuoglio and Pasquale Moretti, were variously held on suspicion of belonging to a mafia organisation, usury and extortion against entrepreneurs and shopkeepers, including funeral homes. 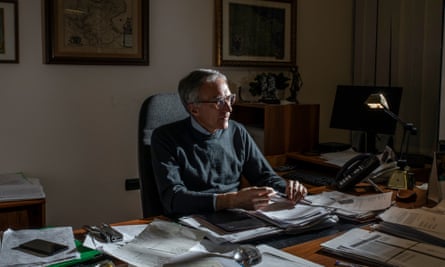 According to prosecutors, the Foggia clans required funeral homes to pay a sum of €50 for each body. “The mafia even managed to bribe an employee of the local administration who provided them every day with a list of people who died in the city,” Ludovico Vaccaro, head prosecutor of Foggia, told the Guardian.

Vaccaro said that usury activities by the clans had become increasingly insistent in recent months, with the bosses taking “advantage of the difficulty entrepreneurs are finding themselves in during this pandemic”. Mobsters offered them loans with interest rates of over 400%.

“The Foggia mafia has become the number one public enemy of the state,” said the national anti-mafia prosecutor, Federico Cafiero De Raho. “But the state’s response against these bosses is getting stronger.” 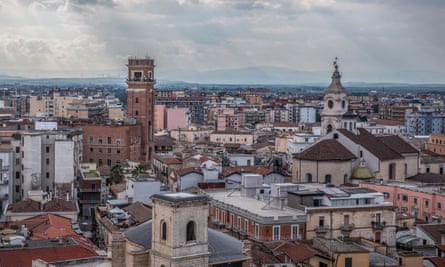 The mafia in Foggia, southern Italy is the state’s number one public enemy, according to a top prosecutor. Photograph: Alessio Mamo/The Guardian

A series of car bombings in Foggia in February prompted the interior ministry to send a team of anti-mafia investigators to Puglia.

“The Foggia mafia is relatively young,” Vaccaro told the Guardian earlier this year. “The clans that make up this organisation have been embedded in this territory for at least 30 years. We cannot compare them to the historical Italian mafia groups like Cosa Nostra and ’Ndrangheta, but it is a mafia characterised by a high degree of aggression and violence. It is what I call a primitive mafia – one that feeds cadavers to pigs, so as not to leave a trace.”

The mafia in Foggia province emerged in the late 1970s, when the head of the Neapolitan mafia Raffaele Cutolo met a delegation of local criminals in Puglia with the goal of “hiring” them into his organisation and extending his influence into the contraband trade in cigarettes in the Balkans.

Today, at least three criminal sub-groups operate in the area around Foggia. Besides the Società Foggiana, which profits from extortion and drug-dealing, there is the Cerignola clan, known for its armoured car heists and cocaine smuggling, and another group active around Gargano, on the spur of Italy’s “boot”, where 80% of killings go unsolved and whose bosses are believed to have killed 360 people.

“Today’s operation is important because it finally allows us to send a message to the entrepreneurs who are being oppressed by these mobsters,” said Vaccaro. “This operation must give them the courage to rebel and collaborate with the authorities. Only like this can we finally get rid of a mafia that is impoverishing our territory.”