The pandemic has exposed deep faultlines between Westminster and the devolved administrations, with the Scottish and Welsh governments expressing growing frustration about the collapse of the much-vaunted “four-nations approach”, a lack of direct communication and the recent uncertainty over whether furlough would be extended beyond England.

Observers say the pandemic has opened many eyes at Westminster to the extent of the powers the devolved nations already hold, but likewise it has led the Scottish National party government to call for their extension, in particular over financial levers. In July the first minister, Nicola Sturgeon, accused Boris Johnson of using Covid as “a political weapon” when he used his first visit to Scotland since the general election to hammer home a message that the UK’s response to the virus exemplified the “sheer might” of the union.

The UK internal market bill has likewise prompted fierce criticism from the Holyrood government since it was published in early September, with Sturgeon describing the post-Brexit plans as “an abomination which would cripple devolution”.

While the SNP continues to oppose all aspects of Brexit, the party has lately focused on these proposals, which include a mutual recognition regime, requiring regulatory standards in one part of the UK to be automatically accepted in others, and which Sturgeon has argued would mean a race to the bottom over food standards and environmental protections. In October, in what remains a symbolic vote, MSPs at Holyrood rejected the bill.

At a more personal level, Johnson struggles with rock-bottom approval ratings in Scotland, compared with strong public trust in the Scottish government’s handling of the coronavirus crisis.

The relationship between the Welsh government and Johnson has often been fraught during the coronavirus crisis. The prime minister’s devolution remarks , in which he described devolution as “a disaster north of the border”, have made it much, much worse.

Welsh ministers are usually thoughtful and measured when they speak about devolution issues and the union – after all, the Labour-led government supports both concepts – but it has reacted angrily to Johnson’s comments.

The Welsh counsel general and minister for European transition, Jeremy Miles, said: “The PM’s comments are shocking but sadly not surprising. It has been clear for some time that this Conservative government is not remotely interested in respecting the devolution settlements across the UK.”

The Welsh first minister, Mark Drakeford, has repeatedly expressed frustration at the lack of regular dialogue between the two governments during the Covid crisis and was furious when Johnson refused to act to stop people travelling from hotspot areas in England to Wales.

There is also huge tension between the governments over the internal market bill, which the Welsh government has called “an outrageous powergrab” that “seriously imperils the devolution settlement”.

However, Drakeford is a firm supporter of the union and has continued to argue that, thus far at least, devolution has worked, saying the Covid crisis has shown Wales does have powers that allow it to act independently.

But there is no doubt Johnson’s remarks will give the nationalists extra firepower. Adam Price, the leader of Plaid Cymru, which backs independence, said the “biggest mistake” for Wales was that it had not left the union already.

The independence campaign group YesCymru, whose membership is growing, said: “People in Wales are waking up to the fact that the UK is about to end. The question for all in Wales – irrespective of politics – is what happens to Wales when Scotland leaves? Independence, or incorporation into England? Devolution won’t hold.”

Northern Ireland is a political minefield for Downing Street because of Brexit, Joe Biden, a dysfunctional Stormont executive and unresolved “legacy” issues from the Troubles.

From 1 January the Northern Ireland protocol will require customs declarations and other checks on all goods coming from Great Britain. Business leaders have warned that trade across the Irish Sea could be paralysed.

There are fears many businesses will not cope with the mandatory paperwork required for sales in Northern Ireland.

Such disruption would torpedo Johnson’s promise of frictionless trade. His ostensible solution – legislation to override the Brexit deal on Northern Ireland – could lead to a hard border with the Republic of Ireland. This would dismay the US president-elect and congressional Democrats. Biden has warned the prime minister that if he undermines the Good Friday agreement he can forget about a trade deal with Washington.

Stormont’s power-sharing government is fraying from divisions over Brexit and Covid-19 restrictions. Sinn Féin wants a referendum on Irish unity and none of the parties – least of all his erstwhile allies, the Democratic Unionist party – trust Johnson. A combustible mix.

The prime minister has alienated almost all sides with a plan to permanently close cases of serious crimes committed during the Troubles. MPs said the plan lacked credibility and legitimacy and raised profound legal, ethical and human rights issues. 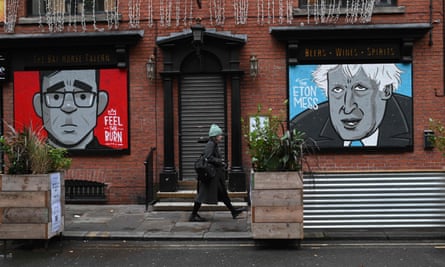 A mural depicting Andy Burnham and Boris Johnson on the front of a closed pub in Manchester. Photograph: Oli Scarff/AFP/Getty Images

Recent fractured negotiations between the government and regional leaders have put devolution back on the agenda in the north. Just a few weeks ago the Northern Powerhouse Partnership renewed its call for a stronger devolved voice for the north-east, with other northern leaders also extolling the benefits of localised decision-making in an effort to seize power from Whitehall.

It followed a public spat between the mayor of Greater Manchester, Andy Burnham, who was labelled “king of the north” as he highlighted the unfair treatment of northern regions during the pandemic.

Burnham described Johnson’s recent comments as worrying and called for the country to adopt a more federal model of government, with those in Greater Manchester becoming “masters of their own destiny”.

“The time has come for a more federal UK where we take more power out of Westminster, put it closer to people, and I think that in the long run will strengthen the country and build a better way of doing politics,” he said.

Bob Buxton, the Yorkshire party leader, said Johnson’s comments highlighted Westminster’s desire to keep a tight grip on the UK. Founded in 2014, Buxton’s party campaigns for the establishment of a devolved Yorkshire assembly with powers over education, environment, transport and housing.

“The prime minister’s remarks … show his true attitudes and fears – he believes Yorkshire wouldn’t vote Tory and so he hogs the power in London,” said Buxton.

Most of England banned from mixing indoors ‘until Easter’ – Metro.co.uk