Around this time last year, Jeremy Corbyn was launching his general election campaign at the Brickworks community centre in his Islington North constituency, and talking of leading the country into a better future.

On Wednesday, Corbyn’s successor, Keir Starmer, denied him readmission to the parliamentary party. And at Brickworks, director Colin Adams groaned in disbelief.

“That’s disappointing,” he said. “Wow, that’s really disappointing. He is just a fantastic MP, he’s so important to people around here. I think there will be a sense of outrage.”

Adams said that on antisemitism, Corbyn “could have done more”, but said that he was commenting first and foremost as a community activist.

“For people round here, disadvantaged by finance, class, education, he is amazing. If he says he’s going to do something – pop his head into a community meeting or campaign against racism – he’ll do it come what may, whatever his commitments. He doesn’t go back on his word. For him not to be a Labour MP, it’s not going to bring the party back together.”

At that 2019 launch, Corbyn said he loved “walking along the Seven Sisters Road, I have many friends around the area – the cafes, the shops.” He won 64% of the vote locally, even as he led his party to national defeat. And around the busy thoroughfare on Wednesday afternoon, most people loved him back. 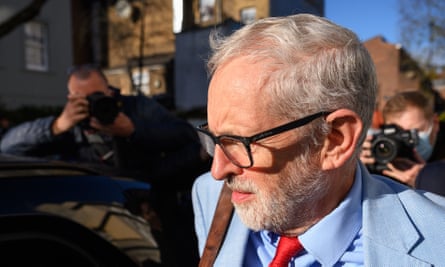 “He’s a very good MP, I have nothing bad to say about Jeremy,” said Audrey Mason-Brown, a 63-year-old shop manager. “I’ve lived round here for over 30 years and Jeremy has been a rock. If he’s going past he stops and talks to you, if you have a problem you can bring it to him. He’s not one of these upmarket hoity-toity MPs, he’s an ordinary person.”

Mason-Brown, a Labour member, viewed Starmer’s decision as the latest example of unfairness in the party’s treatment of Corbyn. “I even think of leaving the party,” she added. “As soon as Jeremy leaves this constituency, I’ll stop voting.”

Niamh, a more recent arrival in her 20s who moved to the area a year ago, echoed Mason-Brown’s view, describing Corbyn as “thoughtful, caring, more realistic somehow – more like a normal person – than most politicians”. On antisemitism, she added: “Corbyn has been used as a scapegoat. I think Keir Starmer is using this as an opportunity to stick the knife in a little bit.”

As a floating voter between Labour and the Greens, she felt disenchanted by the new leadership, she suggested. “I guess it’s more likely that Labour will get into power now, but not for the reasons I would like.”

But not every constituent was on Corbyn’s side. Anna, laden with shopping as she returned to her home on the Andover estate, shook her head sceptically when asked to give her view of her MP. On antisemitism and in general, she said: “There’s something just not quite right about that man.”

She has voted Labour in the area for 40 years, but “didn’t really think much about Corbyn at all” until he became leader, she said. “The more you heard about him, and the more he’s on the news, he stands up there speaking, and you think, please sit down.” Then she paused for a moment, and added: “I suppose he did good, in his way.”

For Theo Clay, a charity consultant and Labour member who said he was relieved the Corbyn era was over, there was little equivocation. “I think Starmer was probably right to do it,” he said.

Whatever his qualities as a local MP, he added, his reaction to the antisemitism crisis could not be dismissed. “It feels like with everything that’s happened up to this point, he can’t get away with half apologies any more. If Corbyn wasn’t willing to be fully contrite about everything that happened under his leadership, there was really no other choice if you wanted a clean break.”

Hundreds of students cram together for late-night rave in Nottingham – Metro.co.uk