The year 2020 has been transformative for how society sees fatherhood, and could produce the most profound shift in caring responsibilities since the second world war, according to researchers, business leaders and campaigners.

Research has shown that while women bore the brunt of extra childcare during the initial coronavirus lockdown and are being disproportionately impacted by the economic fallout, there has been also a huge surge in the number of hours men are spending with their children.

This could lead to a permanent re-evaluation of the value of fatherhood and shift in working patterns, according to Ann Francke, the chief executive of the Chartered Management Institute (CMI).

“Business leaders have seen firsthand what juggling work and family life entails and that both parents need to be empowered to do that,” she said. The shift to home working had forced business leaders to recognise that flexible working could benefit all employees as well as save money, she said.

“Fathers are vital to progressing gender equality for mothers,” she added. “Without progress for fathers at home there can’t be progress for mothers at work, they are two sides of the same coin.”

In May, the Office for National Statistics found that the first Covid lockdown had led to a 58% increase in childcare undertaken by men, whose working hours dropped by one hour and 37 minutes per day. While women still did more childcare, the gender care gap narrowed. In 2015, the ONS found that men were spending 39% of the time that women spent on childcare, compared to 64% during lockdown.

That could lead to the most profound shift in gender roles since the post-war period, said Adrienne Burgess, joint chief executive of the Fatherhood Institute. “Research tells us that when there is a social movement happening, a crisis often accelerates the movement. For example, before the second world war women were gradually moving into the workplace and the war pushed that on – and I think we are witnessing a similar thinking in men’s involvement in childcare,” she said.

Elliott Rae, the founder of musicfootballfatherhood.com, a parenting and lifestyle platform for men, said he had spoken to many fathers who now regretted not previously seeing much of their children during the working week. “The dads I speak to are reflecting on how wrong they had it before and how that negatively impacted their family,” said Rae, who has launched a crowdfunder for DAD, a book collecting stories of modern fatherhood on International Men’s Day, which falls on Thursday.

Donald Mbeutcha, from the Dope Black Dads support network, said he felt there had also been a societal shift, with greater value placed on fatherhood. “On International Men’s Day we don’t want a celebration of a patriarchy that is celebrated 365 days a year – we want to celebrate fathers taking more active roles rather than just getting up, giving their kids breakfast, going off to work and not coming back until past bedtime,” he said. “I think more men are starting to realise the beauty of fatherhood, the joy and balance it brings.”

If men continued to spend more time with their children when the world finds its “new normal”, it could have a lasting positive impact, said Duncan Fisher, of the Family Initiative. “It benefits children and it benefits,” he said. “But really, it benefits men – loving relationships are fulfilling, and that is what life is all about.” 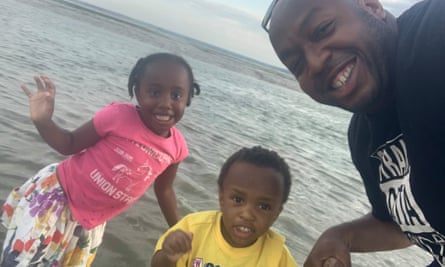 When the pandemic struck, Umar Kankiya, 35, was feeling completely burnt-out, defeated by the daily grind and feeling like he was constantly in a rush. “I’d get up around 5am, get the kids up, drop my daughter at school, my son at childcare, drop the car off then rush to get the train,” says the mental health solicitor and lecturer. “It was constant stress.”

Then, suddenly, he and his wife, also a solicitor, had both kids at home as the country went into lockdown. Kankiya, on a break from work, became chief carer, teacher and bottom-wiper. And he loved it.

“I’ll be honest, all my dad friends share the same view, lockdown has been an absolute blessing in terms of spending time with our children, and seeing them grow and develop,” he says. “I have no hankering to get back to the way it was before.”

Kankiya got a new job in May, and he and his wife, like many couples both working from home, started working in shifts with occasional Zoom bombing from their children, aged 5 and 21 months. “People are more understanding, a lot more aware that you are also a dad. There isn’t that feeling of needing to shy away from that.”

He is convinced that when something like normality returns, few dads will want to return to the way things were before. “I’d like to think when things do get back to normality they are not going to be afraid to speak up.”