Millions of Americans must rely on charity to put Thanksgiving dinner on the table this year, as hunger surges amid a devastating spiraling of the Covid-19 pandemic which the Trump administration has failed to get under control.

In what is traditionally a season of celebration, less than half of US households with children feel “very confident” about having enough money to afford the food needed over the next month, according to the census bureau’s latest pandemic survey. A staggering 5.6m households struggled to put enough food on the table in the past week.

Families of color are suffering disproportionately with 27% of Black and 23% of Latino respondents with children reported not having enough to eat sometimes or often over the past week – compared with 12% of white people.

Overall food insecurity has doubled since last year due to record unemployment and underemployment rates. For families with children, hunger is three times higher than in 2019, according to analysis by Diane Whitmore Schanzenbach, director of the nonpartisan Institute for Policy Research at Northwestern University.

Now, as states across the country contemplate new lockdowns to slow down the rampant spread and record hospitalizations, the unprecedented demand for food aid is on the rise, according to the Guardian’s latest snapshot survey: 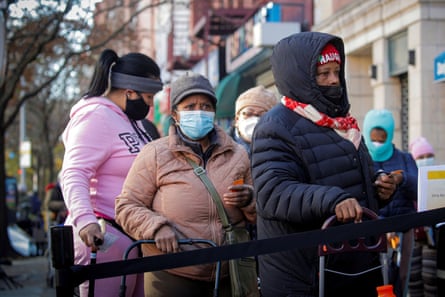 People line up to receive free holiday boxes of food from the Food Bank For New York City ahead of Thanksgiving in Harlem. Photograph: Brendan McDermid/Reuters

“Across the country demand has not let up, and food banks do everything they can to make sure families have food on the table for Thanksgiving. There’s no end in sight, but we can’t be the only solution,” said Zuani Villareal, spokeswoman for Feeding America, a network of 200 food banks nationwide. Since the start of the pandemic, four of every 10 people seeking food aid are first timers.

Hunger is not new in America. Even before the pandemic, 35 million people relied on food banks every year, according to Feeding America. But the pandemic has been catastrophic – despite initial lauded federal interventions such as the stimulus cheques and enhanced unemployment benefit. As many as 54 million people could experience hunger this year, including a quarter of all children.

In some states, the figures are even starker. In New Mexico, one in three children are experiencing hunger this year, according to Sonya Warwick of Road Runner Food Bank, headquartered in Albuquerque.

As most federal benefits have expired and the third stimulus bill, the Heroes Act, continues to languish on Capitol Hill, advocates are increasingly frustrated at the lack of political will to implement measures which would reduce hunger for families.

“Food insecurity is a leading indicator of the economy … it would be super great if the government could respond appropriately, the unnecessary delays have caused real suffering,” said Whitmore Schanzenbach.

At the heart of the frustration is the food stamps program (Snap) – a highly effective anti-poverty tool which also benefits the economy. As hunger increased, the Trump administration failed to boost Snap – as the Obama administration did during the great recession – while continuing to pursue cuts to eligibility.

“It’s difficult to understand the lack of political will to address this when the county is in such a dire emergency,” said Ellen Vollinger, legal director for the Food Research & Action Centre. For years, advocates have urged governments to increase the real value of food stamps as many recipients turn to food banks because they run out of groceries after two or three weeks.

Another program, the US Department of Agriculture’s Farmers to Families scheme that has helped deliver more than 110m boxes of fresh produce to food banks over the last few months, is set to expire by the end of the year. “Less food, more people hungry,” said Susan King, president of the Northeast Florida Food Bank who on Monday was informed that the scheme would end this week.

A $450m boost to the federal Emergency Food Assistance Program for low income families is also set to run out.

Even with help from these programs, some food banks have been forced into bidding wars against Walmart, Costco and other chain grocery outlets to buy enough groceries for those in need. Without government assistance, “we’re headed toward a massive cliff come January,” said Erin Pulling, CEO of the Food Bank for the Rockies which serves Colorado and Wyoming. They’re budgeting to spend an extra $300,000 a month starting next year in order to partially replace the produce from Farmers to Families. Pulling added: “We just can’t serve as many people if this program ends.”

At the same time, national guardsmen called in to help pack and distribute food have pulled back. “We’re asking all healthy, young folks who can to come out and help,” said Angie Rogers of the Arizona Food Bank Network. “Especially in December ahead of the Christmas season, we’re going to see need go up.” 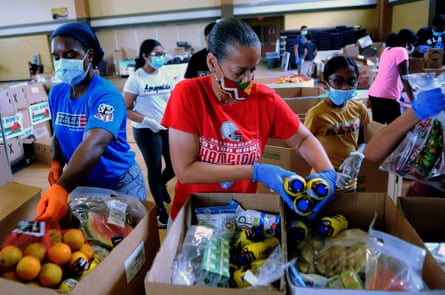 Nationwide, demand for food aid has plateaued at about 60% higher than pre-pandemic times. In some regions of the US, communities had only just recovered from the huge impact of the Great Recession when coronavirus – and the economic crisis it triggered – struck.

Even as hopes build about the roll-out of vaccines in coming months, experts warn that the economic fallout is likely to last much longer and will require systemic changes not just crisis intervention.

In California’s Silicon Valley, many working class families could barely afford to make rent before the pandemic. “With the high cost of living here, even federal and local benefits are really inadequate,” said Leslie Bacho, CEO of Second Harvest Food Bank. “Even those who are still working are struggling.”

Almost 20% of adult renters, that’s 13.4 million people, are currently behind on their rent, according to analysis of the latest census bureau survey by the Centre on Budget and Policy Priorities. Black renters face the greatest hardship, with 33% behind on rent, followed by 24% of Native Americans.

Mike McDonald, CEO of the Southern Arizona Food Bank said it was imperative to shift away from expensive emergency relief – like food aid – to structural changes like a living wage and affordable healthcare which promote economic, food and housing justice. “We need investment in prevention and social maintenance so people’s lives are better and there’s a real safety net.”

“The inequalities that existed before as a result of hundreds of years of structural racism have been exacerbated by the pandemic,” said Christina Maxwell, CEO of the Food Bank of Western Massachusetts. “It’s going to take communities an extraordinarily long time to recover from this. We’re not talking about going back to the old normal. It needs to be better than it was.”